The Centers for Disease Control and Prevention (CDC) updated its recommendations for likely person-to-person spread of SARS-CoV-2 to warn about the risk of multiple, brief, "close contact" encounters with others who are positive for COVID-19.

New data suggest each close encounter ― coming within 6 feet of an infected person ― can increase the risk for transmission, CDC Director Robert Redfield, MD, said during a media briefing. 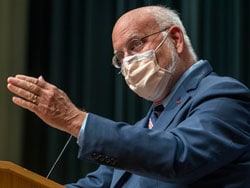 "As we get more data and understand the science of COVID, we're going to continue to incorporate that in our recommendations," Redfield said in response to a reporter's question about a recent study.

Previously, the CDC cautioned against spending 15 minutes or longer in close proximity to an infected person, particularly in enclosed indoor spaces.

In a new report published online October 21 in Morbidity and Mortality Weekly Report, however, investigators "determined that an individual who had a series of shorter contacts that over time added up to more than 15 minutes became infected."

On July 28, a 20-year-old male correctional officer in Vermont had multiple brief encounters with six transferred incarcerated or detained people while their SARS-CoV-2 test results were pending. The six were asymptomatic at the time and were housed in a quarantine unit, reported CDC researcher Julia Pringle, PhD, and colleagues.

The following day, all six inmates tested PCR-positive for COVID-19. The correctional officer did not spend 15 minutes or more within 6 feet of any of the inmates, according to video surveillance footage, and he continued to work.

On August 4, however, he developed symptoms that included loss of smell and taste, myalgia, runny nose, cough, shortness of breath, headache, loss of appetite, and gastrointestinal symptoms. He stayed home starting the next day and tested PCR-positive for COVID-19 on August 11.

Further review of the surveillance video showed that the officer had numerous brief encounters of approximately 1 minute each that cumulatively exceeded 15 minutes over a 24-hour period, the researchers reported.

During all the interactions with inmates, the correctional officer wore a cloth mask, gown, and eye protection. The inmates wore masks while in their cells but did not have them on during brief cell doorway interactions or in the recreation room, according to the report.

No Interaction Is 100% Safe

"We know that every activity that involves interacting with others has some degree of risk right now," said Jay Butler, MD, CDC deputy director for infectious diseases.

"Unfortunately, we're seeing a distressing trend here in the United States with COVID-19 cases increasing in nearly 75% of the country," he said. "We've confirmed 8.1 million cases and, sadly, over 220,000 deaths since January.

"I know these are numbers, but these are also people," Butler added.

"The pandemic is not over," Redfield said. "Earlier this week, COVID virus cases reached over 40 million globally. Here in the United States we are approaching a critical phase."

Four factors associated with higher risk for transmission are the proximity of each encounter, its duration, whether an interaction takes place indoors or outdoors, and the number of people encountered, Butler said.

Butler acknowledged widespread fatigue with adherence to personal protection measures, but added that social distancing, mask-wearing, and other measures are more important now than ever. He noted that more Americans will be spending time indoors with the onset of cooler weather and the upcoming holidays.

A Note of Optimism

Redfield remains optimistic about the limited availability of a vaccine or vaccines by year's end but added that "it's important for all of us to remain diligent in our efforts to defeat this virus."

"There is hope on the way, in the form of safe and effective vaccines in a matter of weeks or months. To bridge to that next phase, we have to take steps to keep ourselves, our families, and our communities safe," said Alex Azar, secretary of the US Department of Health and Human Services. 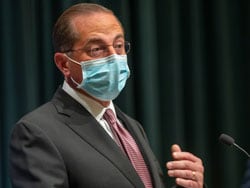 "I know it's been a difficult year for Americans, but we are going to come through this on the other side," Redfield said.

Damian McNamara is a staff journalist based in Miami. He covers a wide range of medical specialties, including infectious diseases, gastroenterology and neurology. Follow Damian on Twitter: @MedReporter.