The study is the second such mandated FDA cardiovascular safety study for a diabetes drug to show cardiovascular benefit, rather than just lack of harm, on top of standard therapy in type 2 diabetes patients at high cardiovascular risk after the EMPA-REG trial, and the first with an agent from the glucagonlike peptide 1 (GLP-1) receptor agonist class. Results of a previous trial with another GLP-1 agonist, ELIXA, were neutral.

Experts here said that LEADER and EMPA-REG may now begin to change the landscape of diabetes therapy, giving doctors a somewhat clearer choice when deciding which drug to use second line after metformin in type 2 diabetes.

The results from the multicenter, international study were presented June 13, 2016 here at the American Diabetes Association (ADA) 2016 Scientific Sessions and were published online simultaneously in the New England Journal of Medicine, by Steven P Marso, MD, of University of Texas Southwestern Medical Center, Dallas, and colleagues.

LEADER began in 2010 and followed 9340 high-risk adults with type 2 diabetes for 3.5 to 5 years, who were randomly assigned to receive either a subcutaneous injection of liraglutide 1.8 mg once daily (or the maximum tolerated dose) or placebo along with standard treatment.

The number of patients who would be needed to treat to prevent one event in 3 years was 66 for the MACE composite and 98 for death from any cause.

Liraglutide also reduced HbA1c, body weight, and hypoglycemia, and its safety profile was similar to what has been seen in previous trials, with gastrointestinal adverse events and increases in heart rate being the most common.

Coming on the heels of the cardiovascular benefit seen for the sodium glucose cotransporter-2 (SGLT-2) inhibitor empagliflozin (Jardiance, Boehringer Ingelheim/Lilly) in the EMPA-REG trial, the LEADER findings have experts talking about a "new era" in the management of type 2 diabetes.

While most agree that metformin remains the first-line drug of choice, these new landmark study data are starting to better inform the clinical choice of second drug based on characteristics beyond their glucose-lowering capacity, speakers said during the press briefing.

"In type 2 diabetes, most of us agree that under most circumstances metformin is the drug of choice," briefing moderator Robert H Eckel, MD, of the University of Colorado, Denver, said, noting that additional potential cardiovascular and also anticancer benefits have been seen with that drug as well.

However, he said, "It's interesting, with LEADER the benefit for cardiovascular death is very similar to what statins do. I think with validation, it could potentially change practice….I'd like to see second and third trials for both [liraglutide and empagliflozin]. Keep in mind there are 25 or 30 trials for statins showing benefit," said Dr Eckel, who was not involved in LEADER or EMPA-REG.

Senior investigator of LEADER, John Buse, MD, of the University of North Carolina, Chapel Hill, added: "I think this changes the conversation with patients. Now, instead of just saying we're giving you this drug to manage your hyperglycemia in diabetes, [we can say] this drug also has the potential to modify your risk for cardiovascular disease and death.

"It was beyond our expectations that we would be able to demonstrate cardiovascular efficacy," he told the press briefing.

Asked to comment, Simon Heller, MD, professor of clinical diabetes, University of Sheffield, United Kingdom, told Medscape Medical News, "I think we are in a different era now. People die from hypoglycemia, whether by insulin or sulfonylureas. We shouldn't forget that.

"These drugs [liraglutide and empagliflozin] don't cause hypoglycemia and have other effects that may be beneficial. I agree absolutely we need to confirm with other studies, but I think we're definitely going to see a shift toward modern therapies."

The LEADER trial included patients with type 2 diabetes who had HbA1c levels of 7.0% or higher. Entry criteria were either age 50 and above with established cardiovascular disease or chronic renal failure or age 60 and older with CVD risk factors. 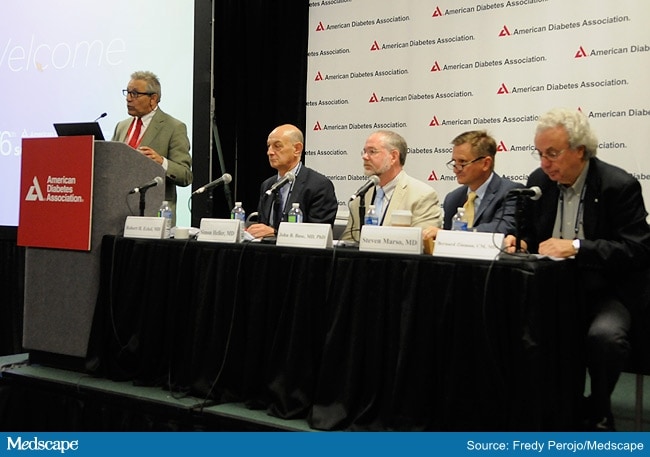 Patients could be drug-naive or taking oral agents or basal insulin but not other GLP-1 agonists or DPP-4 inhibitors, pramlintide, or rapid-acting insulin. In both treatment and placebo groups, current standards of care were targeted for HbA1c, blood pressure, lipids, and antiplatelet therapy.

Hospitalization for heart failure itself was 13% less frequent in the liraglutide group (4.7% vs 5.3%, P = .14). Although not statistically significant in terms of benefit, the lack of any signal for concern with regard to heart failure is noteworthy, Dr Marso said. "There has been a lot of discussion in the incretin space about whether agents such as SGLT2 inhibitors, DPP-4 inhibitors, or GLP-1 receptor agonists are neutral, hazardous, or beneficial for heart failure."

He added: "What's striking is the consistency in the relative risk reduction in all of the major cardiovascular end points that we measured in LEADER."

The prespecified primary microvascular outcome in LEADER was a composite of nephropathy and retinopathy outcomes, and there was a benefit with liraglutide over placebo: time to first renal event was 22% longer with liraglutide, a significant difference. However, this latter effect drove the benefit, as there was no significant difference in retinopathy events between the two groups.

Adjudicated cases of acute pancreatitis occurred in 0.4% of patients taking liraglutide compared with 0.5% on placebo (P = .44). There were two cases of chronic pancreatitis, both in the placebo group.

Hypoglycemia was more common in the placebo group, both with overall confirmed cases of blood glucose levels below 56 mg/dL (43.7% with liraglutide vs 45.6% with placebo, P < .001) and in severe hypoglycemia requiring assistance (2.4% vs 3.3%, P = .016). The likely reason for this, Dr Eckel noted, is that the placebo patients may have been treated more intensively with insulin in attempt to achieve HbA1c targets.

There was a numeric increase in the number of pancreatic-cancer cases with liraglutide (13 vs five) for a higher rate of pancreatic cancer in the liraglutide group (0.3% vs 0.1%), but four more cases were identified on imaging in the placebo group that did not have pathology to establish the diagnosis, so the two groups were not significantly different, Dr Buse noted.

Everything Changing Modestly, but in the Right Direction

Dr Eckel said that the results of LEADER follow in the same vein as those of EMPA-REG.

"In EMPA-REG, many things related to CVD risk were modified in a modest but favorable way. LEADER gives a hint of the same kind of modification.…Everything is kind of changing modestly in the right direction."

But the LEADER investigators note some differences in how the drugs may be working.

"The pattern of cardiovascular benefits that were associated with liraglutide in our trial appears to differ from that with the SGLT-2 inhibitor empagliflozin in the previously reported EMPA-REG OUTCOME trial."

The time to benefit emerged earlier in EMPA-REG than in LEADER, they note, and the variability of the direction and magnitude of the effects on the components of the composite primary outcome in that trial "contrasts with the consistency of effect in the present trial."