Purpose of review To discuss the role of vitamin D in chronic rhinitis and chronic rhinosinusitis (CRS).
Recent findings Vitamin D has been shown to have an immunomodulatory effect with a significant impact on immune function. Specifically, vitamin D regulates the mechanisms which suppress the inflammatory response and direct the differentiation fate of immune cells. Vitamin D has been shown to play an important role in asthma, and the concept of the unified airway model allows the extrapolation of vitamin D as a critical player in chronic rhinitis and rhinosinusitis.
Summary Recent findings on the function of vitamin D may explain aspects of the pathophysiology of chronic rhinitis and CRS, and may help direct future treatment of these diseases.

The importance of vitamin D as an essential nutrient is well known, given its role in calcium and phosphate homeostasis. Over the past two decades, the influence of vitamin D on the immune system has become increasingly clear.[1] Recent work has elucidated that vitamin D harbors actions more akin to hormones and pro-hormones. The discovery of the vitamin D receptor (VDR) has stimulated more research into the nature of this vitamin which has, subsequently, been shown to be a steroid hormone. This steroid constitutes a component of a complex endocrine pathway termed the 'Vitamin D endocrine system'.[2] Investigators have found that vitamin D plays an integral role in the induction of cell differentiation, inhibition of cell growth, immunomodulation, and regulation of other hormonal systems.[3] This review seeks to highlight the recent research with respect to vitamin D and its role in chronic rhinitis and chronic rhinosinusitis (CRS).

The pathophysiology of CRS occurs, primarily, at the interface of the nasal mucosa with the external environment. The nasal mucosa is a highly specialized immunologic barrier that has evolved to process a constant load of foreign antigens with minimal collateral inflammation. Anatomically, the nasal mucosa consists of an epithelial layer of ciliated, pseudostratified, columnar cells. The cilia and tight junctions interconnecting the epithelial cells constitute a mechanical barrier to antigenic stimulation.[4]

Deep in the epithelium reside a variety of immune cells including lymphocytes and antigen-presenting cells (APCs), specifically dendritic cells and macrophages. These are key components of the acquired immune response.[4] The trigger for and modulation of the nasal acquired immune response has yet to be fully elucidated. Pattern-recognition receptors (PRRs), located in the cytoplasm and on the cell membrane, recognize antigens on microbial organisms. PRRs are also capable of detecting debris from necrotic cells, consequently triggering a process that culminates in the production of antimicrobial, antiviral, and antiproteinase products that facilitate pathogen clearance and help maintain the mechanical barrier.[4]

PRRs activate dendritic cells causing them to acquire chemokine receptors and to migrate to lymph nodes.[4] Similarly, various cytokines and microbial products induce a potent activating response on macrophages and these, in turn, produce both proinflammatory and anti-inflammatory mediators.[5] In the lymph nodes, the activated dendritic cells regulate the differentiation of naïve T cells towards a Th1 or Th2 phenotype.[5] This is largely based on the associated cytokine profile which is distinct between each type of T-helper response.[4] The drive towards either a Th1 or Th2 response is modulated by the type of triggering stimulus and by cues from the external environment.[5] In essence, APCs exert a profound regulating effect on the downstream inflammatory response of the sinonasal mucosa. 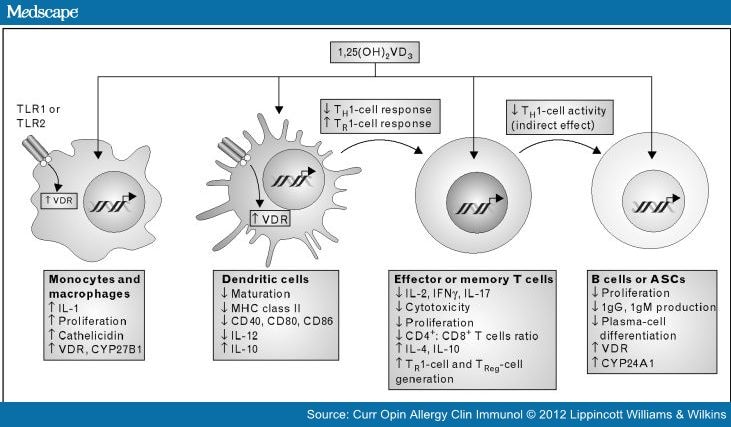 The VDR and vitamin D metabolizing enzymes are expressed by several cells of the immune system. For example, Th1 and Th2 cells are direct targets of the activated form of vitamin D, 1,25-dihydroxyvitamin D3, otherwise known as calcitriol. Indeed, activation of CD4+ T cells results in a five-fold increase in VDR expression, enabling calcitriol to regulate at least 102 identified genes.[7]

This regulatory effect has a downstream impact on the levels of circulating chemokines and cytokines. Th1 cells secrete interferon gamma (IFNγ), interleukin (IL)-2, IL-12, and tumor necrosis factor alpha (TNFα), all of which augment the cell-mediated defense against intracellular pathogens. Th2 cells express IL-4, IL-5, and IL-13, which further propagate the Th2 response. These Th2-derived cytokines modulate the immune response against parasites and are also associated with the regulation of atopy and asthma.[8,9] Vitamin D exerts a strong suppressive effect on the expression of IL-2 and IFNγ in a VDR-regulated mechanism. The suppression of IL-2 production, in turn, inhibits T-cell proliferation – indeed, addition of exogenous IL-2 can rescue T-cells from the antiproliferative effects of vitamin D.[1] Evaluation of T-lymphocyte subpopulations demonstrates that vitamin D blocks the induction of Th1 cytokines, especially IFNγ, while simultaneously enhancing Th2 responses through the enhancement of IL-4 production.[8,9] Overall, vitamin D decreases cell-mediated immune responses. This suppressive effect on humoral immunity is facilitated through the effect of vitamin D3 on APC. In APCs, calcitriol inhibits the production of IL-12, a cytokine that normally enhances the Th1 response.[10••] In effect, vitamin D acts as a physiologic 'brake' on humoral immunity.

The net response is a decrease in Th1 responses and proliferation of T regulator cells which act as a further 'check' on the immune response. The immune response is skewed towards a Th2 response with a significant suppression of the Th1 response.[8,9] Thus, vitamin D may have a suppressive effect on inflammation at the level of the nasal mucosa, potentially influencing the development and propagation of CRS. Interestingly, vitamin D has also been shown to have a stimulatory effect on monocytes in vitro, suggesting a complex role in immune hemostasis rather than a purely suppressive effect on the immune system.[1] The extent of this physiologic balance has yet to be fully elucidated.

Vitamin D also influences the immune response through the regulation of cathelicidin, which is the only antimicrobial peptide produced by humans.[11] Cathelicidin is produced by neutrophils, macrophages, and the cells lining the epithelial surfaces of the skin, respiratory tract, and gastrointestinal tract – the sites which are constantly exposed to potential pathogens[10••] (Fig. 2). 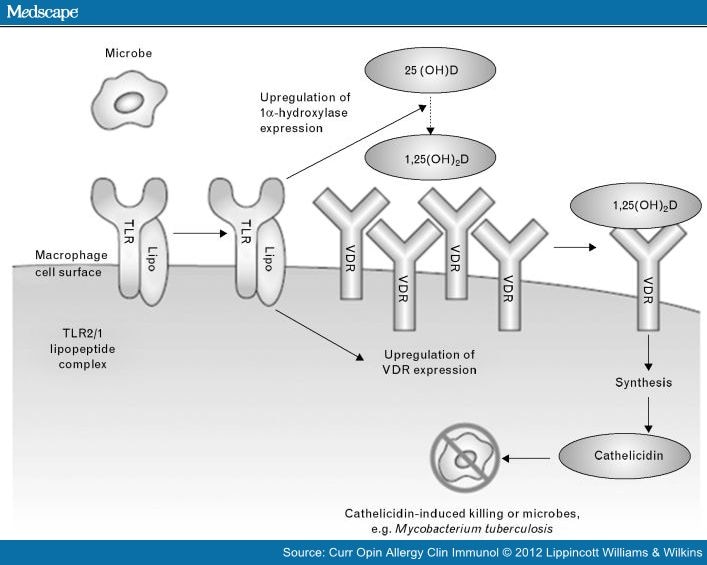 Vitamin D stimulates innate immunity and enhances antimicrobial activity via interaction with vitamin D receptor to upregulate the synthesis of the antimicrobial peptide cathelicidin. Reproduced with permission from [6].

Cathelicidin has a broad antimicrobial activity against Gram-positive and Gram-negative bacteria, as well as certain viruses and fungi. Vitamin D treatment upregulated cathelicidin mRNA in several cell lines and primary cultures including keratinocytes, neutrophils, and macrophages.[12] Vitamin D levels were also found to be significantly lower in patients in the intensive care unit with sepsis when compared with healthy controls. In these patients, serum vitamin D directly correlated with serum cathelicidin, suggesting that systemic levels of cathelicidin may be regulated by vitamin D status, and that this may be important in the control of infections such as in CRS.[13]

There currently exists a paucity of literature specifically evaluating the role of vitamin D in the pathophysiology of CRS. Recently, Mulligan et al.[5] were able to demonstrate several interesting trends with respect to vitamin D and CRS. They were able to show that patients with CRS and allergic fungal rhinosinusitis demonstrate insufficient levels of vitamin D (<32 ng/ml) when compared with controls (Fig. 3). 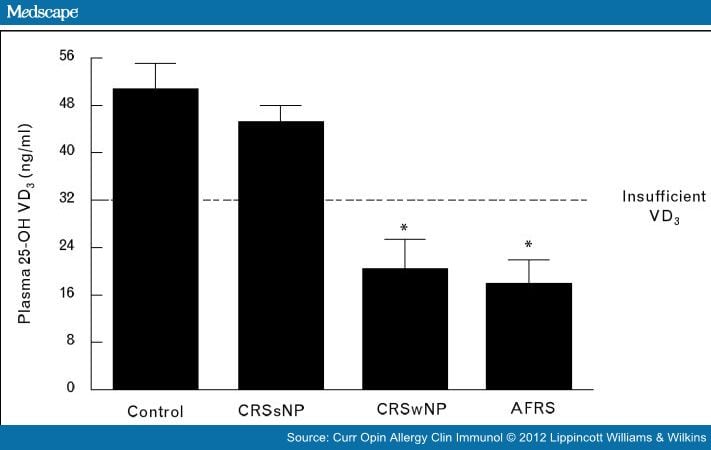 In the study by Mulligan and co-investigators,[5] an inverse relationship between vitamin D and the levels of various immune cells was established in CRS patients. In the subset of patients diagnosed with CRS with nasal polyposis or allergic fungal rhinosinusitis, lower levels of vitamin D correlated to elevated levels of dendritic cells as compared with controls. As discussed, dendritic cells play an important role in directing the differentiation of T-helper cells into Th1 or Th2 subtypes – without vitamin D, the inflammatory response is skewed towards a Th1 subtype promoting a chronic local inflammatory response. The investigators were also able to show that plasma levels of prostaglandin E2 and granulocyte monocyte-colony stimulating factor were upregulated in patients with CRS, and that these chemokine levels were inversely associated with serum vitamin D levels. Furthermore, an interesting correlation between serum levels of vitamin D and the severity of bone erosion on computed tomography scans was noted. Specifically, bone remodeling in patients with insufficient levels of serum vitamin D was significantly greater than in patients with adequate vitamin D levels. This is, perhaps, unsurprising given the well documented role of vitamin D in the regulation of calcium metabolism and bone homeostasis.

Although these results are extremely compelling, the Mulligan study suffers from a small sample size. Future work may extrapolate these data to a larger patient set, ideally through a prospective study, which would help clarify the role of vitamin D in the pathophysiology of CRS. Systemic vitamin D levels could, potentially, be added to the routine workup of patients suffering from CRS and these data could be used to help determine the disease severity and possibly even treatment. To this end, a recent Polish study[15] evaluated the role of vitamin D in the reduction of fibroblast proliferation in vitro from nasal polyps in patients with CRS. Tissue samples were subject to varying doses of calcitriol and a vitamin D analog, tacalcitol, with and without budesonide. A statistically significant decrease in fibroblast proliferation was noted with calcitriol and tacalcitol treatment. Furthermore, increasingly higher doses induced a greater suppressive effect on fibroblast proliferation. This study is a first step towards investigating the utility of topical vitamin D analogs for the treatment of CRS.

Early research suggests that vitamin D is involved in the pathophysiology of chronic rhinitis and CRS. However, this is an area that clearly requires further basic science and clinical research. Nonetheless, it is intriguing to consider the possibility that abnormal vitamin D blood levels – or even the local tissue concentration of vitamin D – could be a critical influencing factor in chronic rhinitis and CRS pathophysiology. The concept of the unified airway would suggest that similar associations from the asthma literature will be found with regards to allergic rhinitis, chronic rhinitis, and CRS. Randomized controlled trials are needed to further evaluate vitamin D and its relationship to allergic rhinitis, chronic rhinitis, and CRS. These findings may then direct researchers to pursue clinical trials aimed at evaluating vitamin D and its analogs as potential therapeutic interventions.