Objective: The aim of this study was to evaluate whether myo-inositol, an insulin-sensitizing substance, may improve some features of metabolic syndrome in postmenopausal women.
Methods: Eighty postmenopausal women affected by the metabolic syndrome were enrolled prospectively in the study and treated with diet plus supplementation of myo-inositol (2 g BID plus diet: intervention group) or with diet plus placebo (control group) for 6 months. They were evaluated at baseline and after 6 months for insulin resistance (homeostasis model assessment ratio [HOMA] insulin resistance), lipid profile, and blood pressure.
Results: Myo-inositol plus diet improved systolic and diastolic blood pressure, HOMA index, cholesterol, and triglyceride serum levels with highly significant differences, compared with the groups treated only with diet and placebo. In the group treated with myo-inositol, a decrease in diastolic blood pressure (−11%), HOMA index (−75%), and serum triglycerides (−20%) and an improvement in high-density lipoprotein cholesterol (22%) were shown.
Conclusions: Supplementation with myo-inositol may be considered a reliable option in the treatment of metabolic syndrome in postmenopausal women.

After menopause, women are at increased risk for obesity, insulin resistance and compensatory hyperinsulinemia with consequent dyslipidemia and hypertension. All these conditions are features of metabolic syndrome, which has been shown to increase the risk of cardiovascular disease.[1] In fact, cardiovascular events are a rare occurrence in premenopausal women, but their incidence increases most markedly after the age of 45 to 54 years, at the time of menopause.[2] Substances that are able to reduce hyperinsulinemia are of interest for women affected by metabolic syndrome, with a view to reducing cardiovascular risk.

Inositol (either in the isoform d-chiroinositol[3] or as myo-inositol[4]) has been reported to improve insulin sensitivity and ovulatory function in young women affected by polycystic ovary syndrome (PCOS). Inositol has been described as a second messenger system that may exert an insulinlike effect on metabolic enzymes.[5]

We carried out a 6-month, perspective, randomized, placebo controlled study on postmenopausal women affected by metabolic syndrome, with the aim of evaluating whether myo-inositol may affect cardiovascular risk by a mechanism such as insulin resistance, hyperlipidemia, and high blood pressure.

The protocol is consistent with the principles of the Declaration of Helsinki, and the study participants gave their written informed consent.

Data are expressed as means ± SD or n (%). After testing data for normality, we used the Student's paired t test (for parametric variables) or the Wilcoxon test (for nonparametric variables like HOMA) to compare values between the baseline and the end of the study. We used one-way analysis of variance (for parametric variables) or the Kruskal-Wallis test (for nonparametric variables) to compare baseline or treatment effects between the two groups. Furthermore, we also calculated the delta (Δ) value, a relative change calculated by subtracting the earlier value from the later value. Finally, the analysis of covariance is used to correct the effect of the body weight on insulin resistance (HOMA). P < 0.05 was considered significant for all the data analyses. The trial is registered as number NCT01046500.

The clinical characteristics of the two groups studied are reported in . At baseline, there was no difference between the two groups in maternal age, BMI, waist circumference, HOMA and blood pressure levels, serum triglycerides, and cholesterol (). Taking into account insulin resistance as the principal outcome, we considered, as a hypothesis of superiority, a HOMA value reduction of 20%, according to the intention-to-treat analysis. Then we calculated the number of women who had a HOMA reduction of at least 20% in both groups, obtaining an absolute risk reduction of 52% and a number needed to treat of 1.9. We had no dropouts in either group, and after 6 months, with the exception of BMI and waist circumference, the differences between the two groups were highly significant for all other parameters (). From baseline, in the treated group, there was a significant improvement in all the parameters considered in the study (). A significant reduction in HOMA, total cholesterol, BMI, and waist circumference after 6 months was also found in the placebo group; however, diet alone did not influence HDL cholesterol and blood pressure values. Furthermore, the Δ decrease for HOMA-IR, waist circumference, and BMI was calculated (Fig. 1). 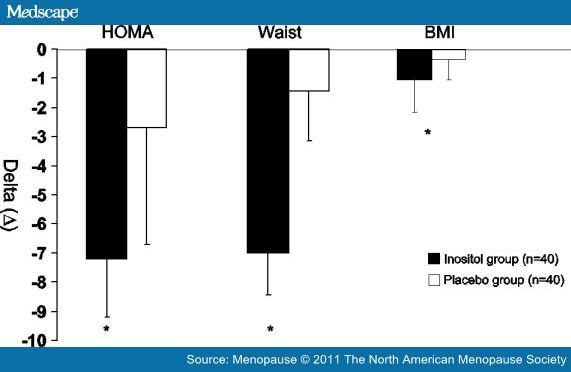 Δ Decrease of HOMA-IR, waist circumference, and BMI in the treated (black) and untreated (white) group. Asterisk (*) indicated statistical significance (P < 0.05) for the comparison of the changes in the myo-inositol group with the changes in the placebo group. HOMA-IR, homeostasis model assessment ratio-insulin resistance; BMI, body mass index.

Previous studies carried out on young women affected by PCOS had shown that the administration of inositol for 8 or 12 weeks reduced circulating insulin and glucose,[4] total cholesterol, as well as improved triglyceride concentrations and diastolic blood pressure when compared to the placebo group.[3] To date, no studies have reported investigations on myo-inositol administration in early postmenopausal women affected by metabolic syndrome. Of course, these women are different from women with PCOS, but increasing evidence supports the same central role of insulin resistance in the pathogenesis of both syndromes. In past studies on PCOS, myo-inositol induced spontaneous ovarian activity and reduced hyperinsulinemia both in the studies of Nestler et al[3] (−38% after 6–8 wk) and Genazzani et al[4] (−48% after 12 wk). In our study, after 6 months of treatment, the decrease of insulinemia was approximately −70%, and the HOMA index also decreased (−75%). Furthermore, other studies have been conducted in people affected by metabolic syndrome using insulin-sensitizing drugs. Rosiglitazone treatment for 12 months[9] reduced the HOMA index by 26%, whereas in another trial[10] carried out with metformin, the cumulative effect on the metabolic syndrome showed no significant difference compared with placebo. These findings are consistent with the concept that the insulin resistance syndrome is a polygenic model of susceptibility[11] and suggest a high presence of genetic traits in our population, which may be ameliorated by myo-inositol supplementation. The experiences of Cheang et al,[12] who obtained different results using d-chiro-inositol in different populations, confirm this hypothesis; in particular, they obtained significant results treating Venezuelan women[3] affected by PCOS but had no result with women from the United States.[12]

With regard to lipid profile, rosiglitazone intervention[9] provided a significant reduction in triglycerides (−20%), which was exactly the same as our study. A better performance was obtained with d-chiro-inositol for 8 weeks (−40%). Moreover, we have shown an increase in HDL cholesterol higher (22%) than that with rosiglitazone (11%) and d-chiro-inositol (5%).[3,9] As for the reduction of diastolic blood pressure, 6-month myo-inositol treatment has shown the best results (−11%), which is better than that with rosiglitazone and d-chiro-inositol intervention.[3,9] However, for systolic blood pressure, our study results overlap the others-both −4.5%. A reduction in waist circumference was obtained in the studies in which inositol was used-ours and the study of Nestler et al;[3] however, there was no difference in the studies with rosiglitazone[9] and metformin.[10]

In conclusion, this first report concerning myo-inositol supplementation for 6 months in postmenopausal women affected by metabolic syndrome demonstrated that it may improve some of the metabolic features of the syndrome such as carbohydrate metabolism, lipid profile, and blood pressure. Further studies and a longer time of treatment are needed to determine if the improvement in risk markers might provide a decrease in cardiovascular morbidity among these women.