Background and Aim: Previous studies have demonstrated reduced exercise capacity in patients with diabetes mellitus. This study evaluated the relationship between fasting blood glucose (FBG) levels and exercise capacity in patients with coronary artery disease (CAD).
Methods: We evaluated 986 consecutive patients with CAD referred for bicycle spiroergometry combined with gated myocardial perfusion imaging. Maximum oxygen consumption (VO 2max) and maximal watts were measured. Patients were divided into 4 FBG categories: <100 mg/dL (n = 611), 100 to 109 mg/dL (n = 144), 110 to 125 mg/dL (n = 102), and ≥126 mg/dL (n = 129). Differences in clinical characteristics, exercise hemodynamics, perfusion imaging, and univariate as well as multivariate predictors of exercise capacity were determined.
Results: Maximal watts and VO 2max were significantly lower (P < .0001) in patients with higher FBG levels and were related to FBG values in univariate and multivariate analyses. Left ventricular volumes and ejection fractions did not differ between the FBG categories. Myocardial perfusion imaging showed a comparable degree of ischemia in the 4 FBG groups. However, patients with higher FBG levels had higher heart rate and blood pressure values at rest resulting in a higher rate-pressure product (values in the 4 FBG groups 8299 ± 2051, 8733 ± 2008, 9558 ± 2583, and 9588 ± 2468 beat/min × mm Hg, P < .0001), suggesting increased myocardial oxygen consumption per unit time at rest.
Conclusion: Exercise capacity in patients with CAD is related to FBG levels. Patients with impaired fasting glucose or an FBG level ≥126 mg/dL reached lower peak watts and lower VO 2max values. This could be attributed to a higher myocardial oxygen consumption per unit time at rest and the inability to adapt their coronary flow adequately to higher metabolic demands during maximal exercise.

Cardiovascular diseasesincluding coronary artery disease (CAD)are the most common cause of death in men <65 years and the second most common cause in women. They are expected to be the main cause of death globally within the next 15 years owing to their rapidly increasing prevalence in developing countries and Eastern Europe and a rising incidence of obesity and diabetes in the western world.[1] Exercise stress testing, often combined with myocardial perfusion imaging, is a validated examination in the follow-up of patients with a history of myocardial infarction or revascularization.[2] Bicycle testing is not only useful in detecting myocardial ischemia but also provides important information on patients' exercise capacity and prognosis especially when combined with spiroergometry. Maximum oxygen consumption (VO2max) is an independent predictor of mortality particularly in patients with heart failure.[3]

Diabetes mellitus (DM) is associated with a 2- to 4-fold increase in the risk of developing CAD. In patients with known CAD and diabetes, the rate of death is >70% over 10 years.[4] According to the guidelines of the American Diabetes Association, a fasting blood glucose (FBG) level ≥126 mg/dL identifies individuals with diabetes.[5] Fasting blood glucose levels between 110 and 125 mg/dL identify patients with impaired fasting glucose (IFG).[5] Several authors have demonstratedeven in patients with CAD without diabetesthat there is a substantially increased mortality rate among patients with IFG.[6,7]

The aims of our study were to (1) determine if exercise capacity is related to fasting glucose levels in patients with CAD and (2) investigate potential pathophysiologic mechanisms that could explain this relationship, including remodeling, ischemia, and hemodynamics.

Subjects were selected from a database comprising all individuals referred to our department for bicycle stress testing combined with spirometry and single photon emission cardiac tomography (SPECT) from May 2001 through December 2004. From the 1457 patients in the database, we selected 986 with a history of CAD. Patients were classified as having CAD if they had a history of myocardial infarction, a history of coronary revascularization either by percutaneous coronary intervention or by coronary artery bypass grafting, or if they had a significant stenosis on coronary angiography occluding at least 70% of the lumen.

Patients were informed to abstain from caffeine- and nicotine-containing products at least 24 hours before testing and to visit the Exercise Physiology Laboratory after overnight fasting.

Blood Sample. A venous blood sample was collected before exercise testing. Serum glucose was assayed by a standard hexokinase enzymatic method. For serum creatinine, a rate-blanked kinetic Jaffe method was used. Glomerular filtration rate was calculated from the following equation: estimated glomerular filtration rate = 186 × (serum creatinine level [in mg/dL])−1.154 × (age [in years])−0.203. For women, this equation was multiplied by a correction factor of 0.742.[8] Total serum cholesterol was assayed by the enzymatic colorimetric enzymatic colorimetric, cholesterol esterase/peroxidase method of Allain et al. Serum high-density lipoprotein cholesterol was determined by the homogenous enzymatic colorimetric method. For serum triglycerides, the esterase PAP kinetic colorimetric reaction without glycerol correction was used. Low-density lipoprotein cholesterol was calculated using the classic Friedewald formula. All serum parameters were determined at 37°C on a Modular system (Roche Diagnostics, Mannheim, Germany). All tests were performed according to an ISO 17025 Beltest accreditation.

Bicycle spiroergometry. Before starting the stress test, we determined the length and weight and calculated the body mass index of the patients. Patients were clinically evaluated by a cardiologist and were classified according to the New York Heart Association functional classes. After resting for 5 minutes, the patients had their arterial blood pressure measured at the right brachial artery with a mercury sphygmomanometer. A 12-lead electrocardiogram was recorded, and resting heart rate (HR) was calculated from the R-R interval.

During the test, patients wore a tightly fitting face mask connected to an Oxycon Pro spirometer (Jaeger-Viasys Healthcare, Hoechberg, Germany). Oxygen consumption per unit time (VO 2), carbon dioxide production (VCO 2), and minute ventilation were measured on a breath-by-breath basis. A standard 12-lead electrocardiogram was continuously recorded, and the HR was followed. Blood pressure was measured by means of a mercury sphygmomanometer at each stage and at the peak of exercise.

Subjects were exercised to their self-determined maximal capacity or until the physician stopped the test because of symptoms such as chest pain or dizziness, potentially dangerous arrhythmias or ST-segment deviations, or marked systolic hypotension or hypertension. A respiratory exchange ratio (VCO 2/VO 2) >1 was taken to indicate maximal effort. When patients were not able to perform maximal bicycle stress, they received an additional intravenous infusion of dipyridamole (n = 146, 15%). Additional pharmacologic stress testing was also used in individuals with pacing rhythm and left bundle branch block.

Maximum oxygen consumption was defined as the highest VO2 obtained at the end of the test and is expressed in mL/min per kilogram. Heart rate reserve was calculated as follows: (peak HR − rest HR)/(220 − age − rest HR) × 100, with values <80% considered as abnormal and indicative of chronotropic incompetence.[9] Rate-pressure product (beat/min × mm Hg) was calculated as the product of HR and systolic blood pressure both at rest and at peak exercise.

The patients' clinical characteristics are shown in  according to their FBG levels. Patients with IFG were, on average, a few years older than patients with normal FBG levels. Patients with FBG level between 110 and 125 mg/dL as well as those with that of ≥126 mg/dL had a higher body mass index and had more frequently a history of hypertension. Most patients were in New York Heart Association class I (83.5%). Revascularization rates were higher in the highest FBG categories. As expected, more patients in the 2 highest glucose categories had a history of DM reported in their medical files; however, DM was diagnosed for the first time in 18 patients with glycemia ≥126 mg/dL. Patients with high FBG levels tended to take less ß-blockers and were more likely to receive diuretics (mainly thiazides to treat arterial hypertension).

Hemodynamics at Rest and During Exercise 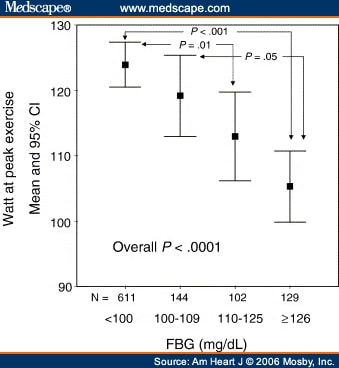 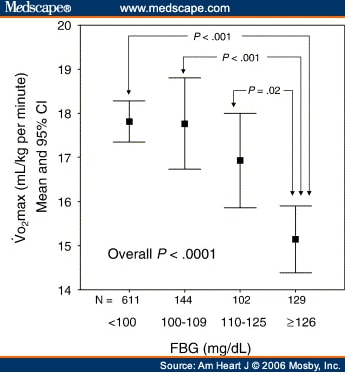 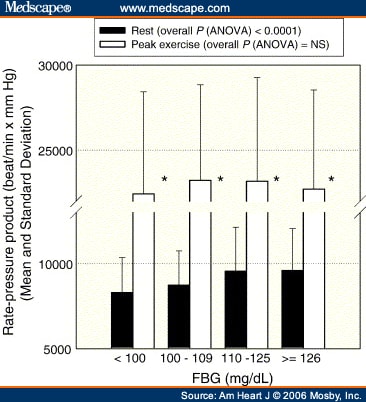 Univariate predictors of maximal watts reached at peak exercise and VO 2max are reported in  .

In a well-defined population of 986 patients with CAD referred for stress testing combined with gated myocardial perfusion imaging, exercise capacity was related to FBG levels. Maximal watts at peak exercise and VO 2max were significantly lower in patients with higher FBG levels.

The strength of our study is that VO2maxin contrast to other studieswas actually measured with spirometry in all 986 participating subjects and not defined by calculation of metabolic equivalents or by estimation of VO2max. Demir et al[11] studied the relation between metabolic equivalents and hemoglobin A1c in 275 diabetes patients without CAD and found a moderate correlation. Hickner et al[12] evaluated the relation between aerobic capacity and categorization of type 2 diabetes in 3700 younger men without known or suspected cardiovascular disease. The VO 2max was calculated from the speed and grade of the treadmill over the final stage of the exercise using reported prediction equations. The VO 2max values were lower in subjects with FBG levels between 126 and 140 and ≥140 mg/dL.

The lower exercise capacity of patients with CAD with higher FBG levels could theoretically be attributed to differences in left ventricular dimensions and pump function, ischemia, or differences in baseline and exercise-induced hemodynamics, compared with patients with normoglycemia.

Left ventricular dimensions and ejection fraction were evaluated in all patients by a validated and highly reproducible technique: gated SPECT.[10] No significant difference was observed between FBG categories regarding resting left ventricular end-systolic and end-diastolic volumes or ejection fraction. Ischemia was evaluated with perfusion imaging, and no major difference was observed between the FBG categories. These SPECT findings suggest that the relation between exercise capacity and FBG levels is less likely to be explained by differences in left ventricular remodeling or ischemia.

Hemodynamic parameters did differ between FBG categories, however. Resting HR was significantly higher in patients with an FBG level between 110 and 125 mg/dL as well as in those with that of ≥126 mg/dL and was independently associated with lower exercise capacity. Patients unable to reach high HRs at peak exercise had a lower exercise capacity. Most of the included patients with CAD had HR reserves <85%, indicating chronotropic incompetence; however, this was more prominent in the highest FBG categories.[9] The pathophysiologic condition underlying an inadequate HR response to exercise is not well understood; some factors contributing to this include the following: autonomic dysfunction, sinus node disease, and left ventricular dysfunction.[15]

Although it is reasonable to assume that higher FBG levels are associated with a lower exercise capacity especially in subjects with IFG and DM, it is also reasonable to inverse this relationship. Wei et al[21] studied 8633 nondiabetic men, determined their cardiorespiratory fitness by a treadmill test, and followed them for 6 years. Subjects with a history of cardiovascular disease were excluded from their study. Level of fitness was defined by total time on the treadmill. Low cardiorespiratory fitness was associated with increased risk for developing IFG and type 2 DM.

Information on the duration of DM or on metabolic control (hemoglobin A1c) in patients with DM were not available, but the FBG test, a simple and inexpensive procedure, predicted exercise capacity independently. Sample size was inadequate to allow reliable subanalysis of patients with diabetes. No information was available on pulmonary function, a possible confounding factor in the relation between aerobic capacity and FBG.

In patients with CAD, FBG levels are related to exercise capacity. Patients with an FBG level between 110 and 125 mg/dL as well as those with that of ≥126 mg/dL reached lower watts at peak exercise and lower VO 2max. Their lower exercise capacity could be attributed to a higher myocardial VO 2 at rest and their inability to adapt their coronary flow adequately to higher metabolic demands during maximal exercise.

We thank Krista Van Vlaenderen, MEng, for her technical support.