Patients taking and not taking concomitant statin therapy reported a similar incidence of all-cause adverse events (AE) of 64.6% vs. 57.9%, respectively, treatment- related AE (54.6% vs. 47.2%), all-cause serious AE (3.9% vs. 3.6%), treatment-related serious AE (0.9% vs. 0.3%), and withdrawals for AE (17.5% in each group). The incidence of flushing was similar in patients with and without statin treatment (45.0% vs. 40.1%), as was the proportion of patients withdrawing because of flushing (8.7% vs. 10.4%). Only about one quarter of patients flushed more than five times. There was no sign of serious hepatic or muscle toxicity. The addition of prolonged-release nicotinic acid markedly raised HDL cholesterol levels irrespective of statin treatment; it was well tolerated and effective when combined with a statin in patients with dyslipidaemia.

Numerous randomised trials performed with HMG CoA reductase inhibitors (statins) in patients at increased cardiovascular risk show that these agents reduce the risk of an adverse cardiovascular outcome by 2050%, irrespective of the precise nature of patient population studied.[1,2] The results of these trials have placed control of low-density lipoprotein (LDL) cholesterol with statins firmly at the centre of management strategies to improve cardiovascular outcomes through control of the lipid profile.[3,4] Further strategies are required, however, to address the substantial burden of cardiovascular risk that is apparently unaddressed by statin therapy. Patients with insulin resistance, especially those with the metabolic syndrome or type 2 diabetes mellitus, often present with an atherogenic lipid profile that is not dominated by hypercholesterolaemia, but rather by low levels of high-density lipoprotein (HDL) chol-esterol, elevated triglycerides and a lipoprotein sub-profile characterised by small, dense LDL.[5]

The use of a fibrate, particularly gemfibrozil, in combination with a statin has led to concerns relating to an increased risk of rhabdomyolysis, a rare but potentially life-threatening manifestation of muscle toxicity.[12-14] There are no data suggesting that such concerns apply to nicotinic acid, nonetheless it is prudent to evaluate carefully the safety and tolerability profiles of this treatment when co-prescribed with a statin. Niaspan® is a once-daily, prolonged-release formulation of nicotinic acid with identical efficacy, superior tolerability and comparable anti-atherogenic benefits compared with the immediate-release formulation.[15,16] A clinical evaluation of prolonged-release nicotinic acid in patients with dyslipidaemia and low HDL cholesterol, NAUTILUS, (the multiceNtre, open, uncontrolled sAfety and tolerability stUdy of a modified-release nicoTinic acId formuLation in sUbjects with dySlipidaemia and low HDL cholesterol), included a substantial subgroup of patients who also received a statin. This report describes the safety and tolerability profiles of prolonged release nicotinic acid in patients who did and did not receive concomitant treatment with a statin.

This report presents data from a subgroup analysis of the NAUTILUS study, an open-label, uncontrolled, phase IIIb study conducted in Germany. Patients were required to have dyslipidaemia, including low levels of HDL cholesterol (< 1.0 mmol/L [< 40 mg/dL] in men and < 1.2 mmol/L [< 46 mg/dL] in women), sub-optimally controlled after four weeks of diet. Eligible patients were required to have a triglyceride level below 9.0 mmol/L (< 800 mg/dL). Exclusion criteria included uncontrolled diabetes and significant hepatic or renal disease, or significant vascular disease defined as stroke within the previous six months, peripheral artery disease, unstable angina, a history of myocardial infarction or uncontrolled arrhythmia.

Patients received once-daily treatment with prolonged-release nicotinic acid for a maximum treatment duration of 15 weeks, in addition to current treatments. Dosages were increased, when tolerated, according to a predefined titration schedule: patients initially received prolonged-release nicotinic acid at a dose of 375 mg (week 1), followed by 500 mg (week 2), 750 mg (week 3), 1,000 mg (weeks 47), 1,500 mg (weeks 811), and 2,000 mg (weeks 1215). Patients who did not receive a dose of at least 1,000 mg were excluded, although patients unable to tolerate this dose could receive a dose reduction to 750 mg/day to improve tolerability. All patients who received study medication were included in the evaluation of safety and tolerability analysis, the main objective of the study. Efficacy analyses (principal lipid parameters) were also undertaken in an intention-to-treat population. Laboratory parameters were measured in a central laboratory.

General demographic and disease characteristics. A total of 566 patients received prolonged-release nicotinic acid at 112 centres. They were included in the safety population, while the intention-to-treat efficacy population included 563 patients. Demographic details at baseline were determined in the safety population. The majority of study subjects were male (67%) and Caucasian (99%). The mean age of the population was 58 years, and 34% were aged > 65 years. The population was obese, on average, with a mean body mass index (BMI) of 31 kg/m2 and a mean waist circumference of 106 cm. Cardiovascular co-morbidity was present in 80% of patients, including hypertension (63%) and coronary heart disease (39%), 39% had a family history of premature cardiovascular disease. Diabetes mellitus was present in 58% of patients (of whom 96% had type 2 diabetes, equivalent to 56% of the safety population) and 26% were smokers.

Overview of adverse events. shows the incidence of adverse events (AE). The majority of AE were related to flushing (see below). The incidence of all-cause AE, treatment-related (possible or unassessable relationship to treatment) AE, and withdrawal because of AE was similar in patients with and without concomitant statin therapy. The most common AE other than flushing arose from the gastrointestinal system, with no clinically significant difference in incidence between the statin and non-statin subgroups ( ). AE arising from the musculoskeletal system occurred infrequently (incidence 45%), and again did not differ in incidence according to statin use. 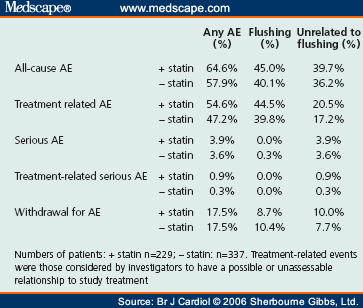 Most Common All-cause Adverse Events (AE) Other Than Flushing 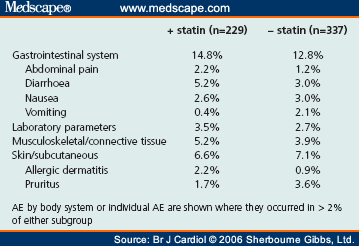 The overall incidence of all-cause serious AE ( ) was low (3.7% of the overall safety population) and similar following stratification of patients for statin use. Only three patients reported serious AE that were considered possibly related to treatment, two of whom were receiving a statin. There were no deaths during the study.

Flushing. Flushing occurred with similar frequency among patients who did and did not receive a statin, ( ). Only one patient reported flushing as a serious AE ( ), but this was not considered to be related to study treatment. Figure 1 shows the numbers of flushes experienced by patients during the study. Although 40% of patients not on statin treatment and 45% of patients on statin treatment flushed at least once, repeated flushing was uncommon: only about one quarter of patients who flushed experienced more than five flushes, and only seven patients (3.1%) in the statin group and seven patients (2.1%) in the non-statin group flushed more than 10 times. For subjects who flushed, the median duration of flushing was identical in either group (60 minutes), as was the median time from ingestion of study medication to the onset of flushing (also 60 minutes). The mean number of flushes/week was similar for statin users (1.8) and non-users (1.6). 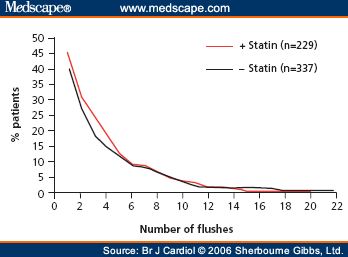 Number of flushes in individual patients during NAUTILUS

Laboratory parameters. Elevations of markers of hepatic dysfunction (aspartate transaminase [AST]/glutamic-oxaloacetic transaminase [GOT] and alanine transaminase [ALT]/glutamic pyruvate transaminase [GPT]) or muscle toxicity (creatine phosphokinase; [CPK]) were rare. No patient had AST or ALT elevations greater than three times the upper limit of normal (ULN), and there were no instances of CPK elevations five times higher than the ULN. Changes in creatine kinase were minor and very similar in the statin group (baseline/final values were 123/134 U/L) and in the non-statin group (120/133 U/L). Creatinine levels remained stable: values at the beginning and the end of treatment in the overall safety population were 86 µmol/L and 85 µmol/L, respectively. Increases in creatinine levels were reported as AE for only two patients (0.4% of the overall safety population, one receiving a statin and one not).

Increases in levels of blood glucose were common. However, there were no clinically meaningful differences in the proportions of patients with or without statin treatment who reported an increase in glycosylated haemoglobin (HbA1C) from baseline of > 0.2% units (44.5% vs. 45.8%), > 0.5% units (18.3% vs. 22.2%) or > 1.0 % units (6.8% vs. 9.5%). Changes in antidiabetic treatment were common: the dose of such treatment was decreased in 14 patients and stopped altogether in 93 patients, while 36 patients received a new drug or a dose increase. 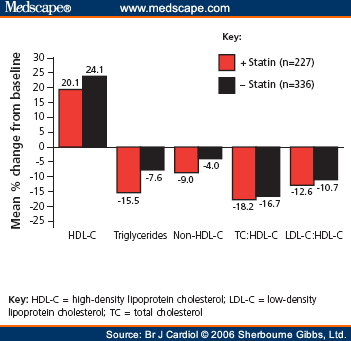 Almost half of the NAUTILUS population were receiving a statin at baseline. Receipt of a statin did not influence the incidence of all-cause or treatment-related AE or serious AE, or the incidence of premature withdrawal from the study. Neither did statin treatment influence the incidence of specific AE known to occur during treatment with nicotinic acid, including flushing and gastrointestinal symptoms. Laboratory results showed a low incidence and severity of side effects relating to hepatic, renal or muscle function. In particular, there were no large CPK increases in statin-treated patients. A joint statement from the American College of Cardiology, the American Heart Association, and the US National Heart, Lung and Blood Institute defines rhabdomyolysis as muscle symptoms with marked CK elevation (typically substantially greater than 10 times the ULN) and with creatinine elevation (usually with brown urine and urinary myoglobin).[17] No serious muscle toxicity occurred when prolonged-release nicotinic acid was combined with a statin in NAUTILUS. The results of the present study are consistent with extensive previous clinical experience with prolonged-release nicotinic acid in the US, where analysis of data arising from more than 12 million prescriptions has revealed no excess serious muscle toxicity with prolonged-release nicotinic acid-statin combinations, compared with a statin alone.

The small increases in LDL cholesterol observed during treatment with prolonged-release nicotinic acid were unexpected, given that its addition to a statin has been shown to produce modest further reductions in LDL cholesterol.[21,22] Similarly, the observed increases in blood glucose following treatment with prolonged-release nicotinic acid were unexpected, given that studies in subjects with type 2 diabetes have demonstrated minimal effects on glycaemic function whether nicotinic acid was administered with[18] or without[23] a statin, when the study protocol allowed adjustment of oral antidiabetic medication. Changes to treatment regimens confounded these measurements, however. Patients switching to less intensive therapy for lipid or blood glucose management clearly outnumbered those who received more intensive therapy for these conditions during the study. It is likely, therefore, that the changes in blood glucose and LDL cholesterol that occurred during the study arose as a result of changes to treatments other than prolonged-release nicotinic acid.

Cite this: Safety and Tolerability of Prolonged-Release Nicotinic Acid Combined With a Statin in NAUTILUS - Medscape - Jul 01, 2006.