Effects of Herbal Supplements on the Kidney

A recent and frequently cited survey of alternative medicine revealed that 42% of Americans use alternative therapies, with 12% of these therapies being the use of herbal supplements at a cost of $5 billion annually. Furthermore, 60% of people using alternative therapy do not report this information to their health care providers (Eisenberg, Davis, & Ettner, 1999). One problem with dietary supplement use is lack of consistent requirements for rigorous safety, efficacy, and purity testing resulting in varying amounts of active constituents from batch to batch.

Although herbal medicine use continues to grow in many disease conditions, the risk from use may over shadow potential benefit, especially in the renal compromised patient population (Foote & Cohen, 1998; Isnard et al., 2004). Vulnerable times for the renally compromised patient include pre-dialysis, dialysis, and the post-renal transplant periods. They may also be confronting co-morbid disease states such as hypertension or diabetes. Renal patients may reach for additional therapy in the form of herbal dietary supplements because they experience adverse side effects or lack of efficacy from conventional medicines.

The most dramatic and highest profile case of herbal nephrotoxicity occurred from 1990-1992 in over 100 people in Belgium who ingested a Chinese weight loss/slimming remedy containing aristolochic acid principally from the plant Aristolochia fangchi (Vanherweghem et al., 1993). Seventy of these patients required renal transplants or dialysis and 30 subsequently developed urothelial carcinoma. In 2000, the FDA identified two new cases of interstitial renal fibrosis from aristocholic-containing herbal products. The resulting nephropathy is referred to as "aristolochic acid nephropathy" or less accurately "Chinese herb nephropathy." Aristolochic acid is a nitrophenanthrene carboxylic acid which forms DNA adducts in renal as well as other tissues after metabolic activation (Volker, Stiborova, & Schmeister, 2002). The DNA adducts result in genotoxic mutations resulting in urothelial carcinoma as well as the characteristic renal interstitial fibrosis and extensive loss of cortical tubules. Aristolochic acid is found in several other plants particularly in the Asarum and Bragantia genera. Hundreds of additional cases have been reported in several European and Asian countries since these early reports in Belgium. The FDA has imposed strict guidelines to prevent any Chinese herbal products containing aristolochic acid from entering the U.S. market.

A similar type of nephropathy has been reported in the Balkans and has been termed "Balkan endemic nephropathy" (Tatu, Oren, Finkelman, & Feder, 1998). The causative agent in this type of nephropathy is plant products contaminated by the fungal mycotoxin ochratoxin A. It also forms mutagenic DNA adducts in renal tissue which likely underlies the observed pathology.

Many traditional medicines and foods especially in the tropical regions of Africa and Asia contain renal toxic plants. One such food/medicine is the djenkol bean, a pungent smelling edible fruit of the hardwood tree Pithecellobium labatum (Areekul, Kirdudom, & Chaovanapricha, 1976). A 70% ethanol extract of the djenkol bean containing the toxic compound djenkolic acid was fed to monkeys, rats, and mice. Histologic examination of their kidneys showed severe tubular necrosis with a lesser degree of glomerular cell necrosis. A traditional remedy in South Africa called "Impila" is made from the roots of the plant Callilepis laureola. It is used to treat a number of conditions and has marked hepatic and renal toxicity. The renal damage caused is characterized by acute proximal convoluted tubule and loop of Henle necrosis which can lead to kidney failure (Stewart, Steenkamp, van der Merwe, Zuckerman, & Crowther, 2002).

Several medicinal plants have the potential to alter plasma levels of potassium resulting in either hypokalemia or hyperkalemia. Licorice root (Glycyrrhiza glabra), especially when used at high doses and for prolonged periods, has a well-known pseudoaldosterone-like effect on the reabsorption of sodium and potassium (Stewart et al.,1987). Sodium retention is increased, potentially increasing blood pressure with a corresponding decrease in K++ leading to hypokalemia. Hypokalemia may in turn increase the toxicity of drugs such as digoxin by increasing its binding to cardiac membranes. The mechanism of this effect relates to glycyrrhizic acid in licorice root being hydrolyzed to glycyrrhetenic acid which is an inhibitor of renal 11-hydroxysteroid dehydrogenase. This enzyme catalyzes the inactivation of cortisol to cortisone. Cortisol accumulates in the kidney and stimulates the aldosterone receptors in cells of the cortical collecting duct thus increasing Na+ reabsorption (Funder, Pearce, Smith, & Smith, 1988).

These herbs may be of particular interest to patients pre-dialysis who believe that they may be able to stimulate their declining kidney function and thus delay the need for dialysis. The following herbs have traditional use as diuretics: juniper berry (Juniperus communis), parsley (Petroselinum crispum), dandelion (Taraxacum officinale), horsetail (Equisetum arvense), asparagus root (Asparagus officinalis), lovage root (Levisticum officinale), goldenrod (Solidago virgaurea), uva ursi (Arctostaphylos uva ursi), stinging nettle leaf (Urtica dioica), and alfalfa (Medicago sativa) (Fetrow & Avila, 1999). These herbs with varying degrees of diuretic activity require caution even in healthy individuals but should be especially a concern for the renal- compromised patient. Most of these herbs should more accurately be called "aquaretics" in that they increase glomerular filtration rate and urine output but do not stimulate electrolyte secretion. Some act as direct tubular cell irritants and others may alter serum electrolytes with resultant cardiovascular consequences.

Juniper berries contain terpine-4-ol in the volatile oil fraction which may cause kidney irritation and damage in excess (Newall, Anderson, & Phillipson, 1996). In Germany, parsley and goldenrod are indicated for systemic irrigation of the urinary tract and for preventing kidney stones. The diuretic effect of parsley leaf and root is due to its volatile oil components myristicin and apiole (Newall et al., 1996). Also in Germany, dandelion, horsetail, and uva ursi are licensed as standard medicinal teas to stimulate diuresis.

There have been many reports especially of Chinese and Ayurvedic herbal products containing nephrotoxic heavy metals such as lead, mercury, cadmium, and arsenic (Espinosa, Mann, & Bleasdell, 1995; Keen, Deacon, Delves, Moreton, & Frost, 1994; Wu, Hong, Lin, Yang, & Chien, 1996). To add to the complication, many heavy metals are considered medicinal in these medical systems but their presence in some imported formulations are not revealed on their labels. In addition some of these same herbal products contain pharmaceutical drugs. Formulations containing nonsteroidal anti-inflammatory drugs (NSAIDs) may lead to renal failure via changes in intrarenal blood flow. Another example is a case where a Chinese herbal formula contained the drug phenylbutazone which caused analgesic nephropathy (Segasothy & Samad, 1991). The California Department of Health Services recently screened 260 imported Asian patent medicines and found that 83 contained undeclared drugs or heavy metals (Marcus & Grollman, 2002).

Herbs and the Transplant Patient

The transplant patient is also at risk for complications from herbal remedies such as Echinacea (Echinacea purpurea), which is promoted as an immune system stimulant (Combest & Nemecz, 1997). This effect could endanger the transplant patient taking immunosuppressant drugs. Furthermore, St. John's wort (Hypericum perforatum) causes a decrease in cyclosporine, an immunosuppressant, serum levels thus compromising the success of the organ transplant (Mandelbaum, Pertzborn, Martin-Facklam, & Wiesel, 2000). Although not yet demonstrated, many other herbal supplements may have a similar effect on the metabolism of cyclosporine as well as other drugs used to treat the transplant patient (see ). 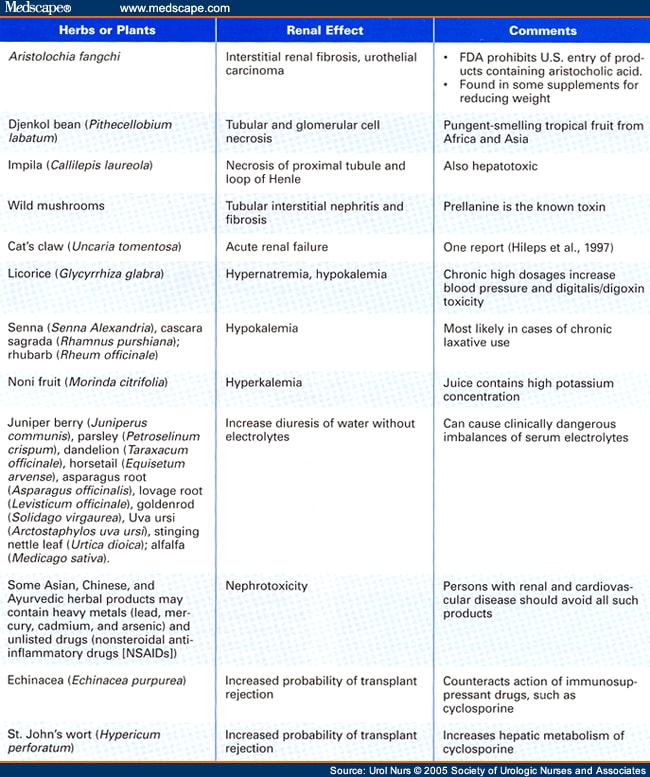 Another potentially useful nephro-protective medicinal herb popular in Ayurvedic medicine is picroliv (Picrorhiza kurrooa). Extracts from the roots and rhizomes offer protection against various hepatic and renal toxins. Picroliv protects the kidney in a renal ischemia-reperfusion induced injury (IRI) model in rats (Seth et al., 2000). Pretreatment of rats orally with picroliv for 7 days before initiation of experimental IRI lowered renal lipid peroxidation, reduced apoptosis, and generally increased the viability of renal cells. Another study in rats found that oral administration of picroliv to rats exposed to the carcinogen 1,2 dimethylhydrazine decreased the extent of renal necrosis (Rajeshkumar & Kutton, 2003). As with milk thistle animal studies using picroliv support their potential clinical benefit as nephro-protectants. However, human clinical studies are needed to confirm these Results in cell culture and animal models.

Astragalus (Astragalus membranaceus), a popular herb used in Chinese traditional medicine, is effective against experimentally induced glomerulonephritis in rats, especially in reducing proteinuria (Su et al., 2000). Several clinical studies also showed a reduction in proteinuria in patients with chronic glomerulonephritis by Astragalus (Shi et al., 2002). Cordyceps (Cordyceps sinensis), a fungus found growing in caterpillar larvae of certain moths, has long been valued as a kidney tonic in China (Zhu, Halpern, & Jones, 1998). One study in 61 patients with lupus nephritis showed that a combination of 2 g to 4 g of cordyceps powder together with 0.6 grams of artemisinin from the plant Artemisia annua for 3 years improved kidney function as measured by creatinine clearance (Lu, 2002). Another study found that cordyceps lessened the nephrotoxicity of cyclosporine in kidney transplant patients (Xu, Huang, Jiang, Xu, & Mi, 1995). An anti-oxidant protective mechanism was postulated for this protective effect. The Japanese traditional remedy Sairei-to, a 12 herb mixture, has shown in human and animal studies to protect the kidney in gentamicin renal toxicity, IgA nephropathy, and lupus nephritis (Ohno et al., 1993). Another study in rats showed that extracts from the root of the plant Salvia miltiorriza (Danshen) along with fructose 1-6 diphosphate prevented the decline of renal cortical Na-K-ATPase activity induced by ischemia and gentamicin (Lu & Li, 1989). Further, extracts of the plant Herniaria hirsute inhibit calcium oxalate crystal aggregation and thus could be useful in preventing kidney stone formation (Atmani & Khan, 2000). In summary, there seems to be many potentially protective medicinal plants and supplements that may protect the kidney perhaps via acting primarily as anti-oxidants (see ).

The nurse may be one of the first members of the health care team to be approached by the patient using or contemplating the use of an herbal product for renal failure symptoms. The nurse should establish dialogue with patients regarding use of herbal supplements which affect the kidney. The nurse should be armed with information and legitimate Internet sources regarding the effect of dietary supplements on the kidney. As nurses, we want to be proactive during the routine history and physical and include questions such as "Tell me about any herbal supplements you may be using because we want to provide the safest care possible for you and need to know all medications and supplements you take. Some prescribed medications may interact with the supplements and some may affect kidney function." The nurse should also have evidence-based herbal dietary supplement references to share with patients such as the Professional's Handbook of Complementary and Alternative Medicines published by Amazon Books and the Natural Medicines Comprehensive Database available online and in print (Barrett, 2000). lists interventions to facilitate safe care for renal patients using herbal dietary supplements.

The increased patient use of alternative medicine requires the nurse to be aware of potential risks and benefits that alternative medicines may offer. Nephrotoxic plants containing aristolochic acid and djenkol bean must be avoided in all patients but especially in renal-compromised patients. Other herbal remedies such as licorice root, senna, cascara, and rhubarb may alter serum potassium values or increase the risk of kidney stones high in oxalic acid. Transplant patients must be made aware of the potential risk of complications from Echinacea and St. John's wort as these medicinal plants may cause a decrease in the effect of immunosuppressant drugs. In summary, the nurse plays a vital role in monitoring the ingestion and effects of herbal supplements in the renal-compromised patient.