The Role of Statins in Preventing Stroke

Epidemiological studies have not demonstrated a clear relationship between stroke risk and hypercholesterolemia. Clinical trials using statins have demonstrated a reduction in stroke, in particular, in patients with established coronary artery disease. The disparity between epidemiological and clinical studies suggests hypercholesterolemia is a true risk factor for stroke that evaded detection in epidemiological studies, or that statins possess other properties that render them useful in stroke prevention. These effects have been loosely termed "pleiotropic" in the lipid literature and revolve around putative effects of statins on endothelial function, inflammation, thrombosis, plaque stability, and immune regulation. Questions remain as to the mechanisms of benefit of statin therapy in stroke prevention, the role of statins in the primary prevention of stroke, and the role of statins in modulating the immune system in the brain.

Hypercholesterolemia is a risk factor for coronary artery disease (CAD). Numerous clinical studies have shown that low-density lipoprotein (LDL) cholesterol plays a major role in the pathogenesis of CAD;[1,2] however, based on epidemiological studies, there is no clear evidence for a relation between stroke risk and hypercholesterolemia.[3,4]

In addition, randomized trials show that stroke reduction occurs over a wide range of initial lipid levels.[6,9,18,19] The Heart Protection Study (HPS)[18,21] (which included over 20,000 patients) and the Anglo-Scandinavian Cardiac Outcomes Trial (ASCOT)[19] study (which included over 10,000 patients) provide strong support for the role of statin therapy in reducing risk of stroke in patients with average or relatively low LDL cholesterol levels. In HPS, larger numbers of subjects suffered a stroke than in any previous cholesterol-lowering trial. The results demonstrate that statin therapy rapidly reduces the incidence not only of coronary events, but also of ischemic strokes (with no apparent effect on cerebral hemorrhage), even among individuals who do not have high cholesterol concentrations. Allocation to 40 mg simvastatin daily reduced the rate of ischemic strokes by approximately 25%. HPS also provides definitive evidence that statins are beneficial for patients with preexisting cerebrovascular disease, even if they do not already have coronary disease.[21]

These findings, coupled with the observation that lipid lowering by other means (e.g., fibrates, resins, or diet) has no impact on stroke incidence,[6,7,21,22] suggest that statins may be unique among lipid-lowering drugs in relation to stroke reduction. Statins have more robust effects on LDL cholesterol reduction than other lipid-modifying agents; therefore, the effects may reflect better LDL cholesterol reduction. However, the disparity between epidemiological and clinical studies may indicate additional biologic effects of statins that contribute to stroke reduction.[5,6,23] These effects have been loosely termed "pleiotropic" in the lipid literature.[10,24,25] Pleiotropic effects which may be contributing to the decreased incidence of stroke in patients on statin therapy include atherosclerotic plaque stabilization, decreased inflammation, improvement in endothelial function, and altered thrombogenicity (Figure 1). 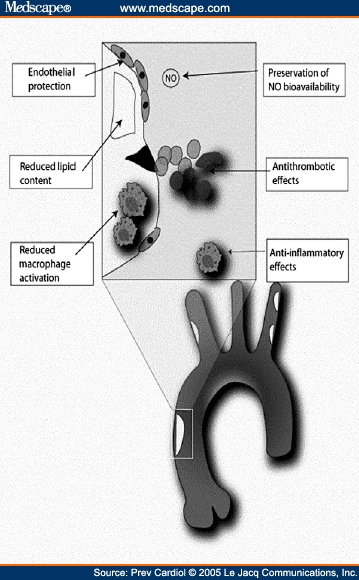 The aorta and carotid are pericerebral arteries that may contain a significant burden of atherosclerotic plaque. Plaque at these sites may become unstable through macrophage elaboration of matrix metalloproteinases that weaken the fibrous skeleton of plaque, making disruption more likely. Plaque disruption is accompanied by thrombosis that predisposes to artery-to-artery thromboembolism and stroke. Statins have a number of putative effects that may stabilize aortic and carotid plaque. These include effects on plaque lipid content, macrophage activation, protection of the endothelium through enhanced nitric oxide (NO) bioavailability, anti-inflammatory, and antithrombotic actions.

There is not a strong epidemiological association between hyperlipidemia and stroke. Studies that show statin therapy is associated with reduced incidence of stroke may be due to the effect of statins on factors such as inflammation. Engstrom et al.[26] demonstrated that patients with hyperlipidemia and elevated inflammatory markers (such as fibrinogen and haptoglobin) are at increased risk for ischemic stroke over long-term follow-up, but in the absence of these inflammation-sensitive proteins, hyperlipidemia was not a risk factor for stroke. Statin therapy suppresses T-cell activation and inhibits the release of proinflammatory cytokines[5,24,25] that are critical mediators of inflammatory and immunological responses in the brain and are produced by neurons, glial cells, and the endothelium.[26] Statin therapy also influences C-reactive protein levels, which is another important marker of inflammation that also appears to be an independent risk factor for the development of ischemic stroke.[27-29] Statin therapy reduces C-reactive protein level independent of its effect on serum LDL cholesterol. For example, in the Air Force/Texas Coronary Atherosclerosis Prevention Study (AFCAPS/TexCAPS),[29] lovastatin appeared to be highly effective in reducing the risk of acute coronary events in participants with elevated C-reactive protein levels but no hyperlipidemia. Therefore, statins may be more effective in reducing cardiovascular events in patients with a high compared with low C-reactive protein level.[29]

Endothelial dysfunction is a risk factor for cerebrovascular events.[30,31] Statin therapy has been shown to improve endothelial function,[25,32-34] and there is evidence suggesting that statin therapy is accompanied by increased nitric oxide (NO) bioavailability.[5,35,36] NO modulates endothelial function, affecting both vascular tone and maintenance of a thromboresistant interface between the bloodstream and the vessel wall.[36] Improvement in endothelial function may, then, be a contributing mechanism to the decreased incidence of stroke observed in patients on statins. For example, studies in a murine experimental model of ischemic stroke show that prophylactic statin therapy enhances cerebral blood flow, reduces infarct size (by approximately 30%), and improves neurologic outcome in normocholesterolemic animals.[37] In this animal model, statin therapy directly upregulated brain endothelial type III NO synthase activity without altering expression of neuronal NO synthase. This effect was independent of change in cholesterol level and was reversible by cotreatment with mevalonate or geranylgeranylpyrophosphate. These observations highlight important cholesterol-independent actions of statins and underscore the potential biologic relevance of intermediates in the cholesterol biosynthetic pathway. In a similar study, atorvastatin has been shown to reduce stroke size in normocholesterolemic mice through cholesterol-independent mechanisms.[38]

Experiments have demonstrated that cholesterol reduction is accompanied by favorable alterations in a number of mediators of plaque stability.[39,40] Studies have shown that statins decrease macrophage number, reduce expression of tissue factor, adhesion molecules, and matrix metalloproteinases within plaque.[39] The 3-hydroxy-3-methylglutaryl coenzyme A reductase inhibitors also reduce the oxidation of LDL, macrophage uptake of LDL,[24,25] and reduce monocyte adhesion to endothelium.[25] Lipid lowering with statins results in increased smooth-muscle cell content (a surrogate of plaque stability) and decreased collagen degradation (which may further enhance plaque stability).[39] Clinical studies support these experimental observations and provide further evidence that statin therapy may be associated with plaque stabilization. Statins may also inhibit atherogenesis through the inhibition of vascular smooth-muscle cell proliferation and migration, and thus attenuate plaque growth and new lesion formation.[41]

Another factor which may contribute toward decreased risk for stroke with statin therapy is the effect of statins on platelets and the endogenous balance of thrombosis/thrombolysis.[40] Statin therapy decreases platelet activation and aggregation, and thereby may decrease the propensity toward thrombosis.[10,23,42,43] Statin therapy inhibits tissue factor expression by macrophages, which plays an integral role in blood coagulation and is an important determinant of plaque thrombogenicity.[23,25] There also may be a reduction in plasminogen activator inhibitor activity, which would facilitate fibrinolysis.[23] All of these factors may contribute toward decreased risk for stroke seen in the statin studies. These statin effects may lead to decreased thrombus formation and thereby influence the development of clinical activity related to atherosclerotic plaque.

There is persuasive evidence that statins have beneficial effects extending beyond reduction of major coronary event rate and all-cause mortality. Clinical and experimental data show that statins reduce stroke, particularly in patients with established vascular disease and among patients with a high burden of vascular risk factors. Other studies in animal models of stroke suggest that statins may also possess neuroprotective properties that may be important during cerebral ischemia.[37,38] The effects of statins on stroke are at variance with epidemiological studies and suggest that statins reduce stroke through cumulative improvements in a number of different components of atherosclerosis including effects on the endothelium, thrombosis, plaque stability, and through anti-inflammatory effects.

More information is needed before statin therapy can be recommended as a specific indication for secondary or primary prevention of stroke.[6,20] Results of the ongoing Stroke Prevention by Aggressive Reduction in Cholesterol Levels (SPARCL) trial[44] will provide additional information about the role of statins in the minority of patients with prior stroke but no history of coronary heart disease, other occlusive arterial disease, or diabetes. However, considering the discussion above, therapy guided by National Cholesterol Education Program (NCEP) guidelines[45,46] may have a large impact in stroke reduction. Questions remain as to how low LDL targets should be in specific populations, and the guidelines will probably change as data from large studies such as HPS[18,21] and ASCOT[19] are considered. Future studies that look at stroke as a primary end point for statin therapy will further clarify possible expanded indications for statin therapy.