Oral Contraceptives: Their Mode of Action and Dermatologic Applications

The first contraceptive pill available for human use in 1960 contained the estrogen mestranol, an ethinyl-estradiol precursor, in a very high concentration (150 mg), and norethynodrel, a 19-nortestos-terone derivate progestin.[1] The high dose of estrogen in these pills was implicated in the development of cardiovascular and thromboembolic events, and starting in 1970 the doses of ethinyl estradiol were significantly reduced. Modern pills, known as "low-dose oral contraceptives (OCs)," contain ethinyl estradiol at concentrations of 20-35 µg. The subsequent discovery of deleterious effects of progestin on the lipid profile prompted a flurry of research into OCs that led to an understanding of the mechanism of action of the combination of estrogen and progestin, its influence on androgenic metabolism, and the development of new synthetic progestins to replace the "old" ones. These innovative OCs were found to be safe in young healthy women without risk factors for heart disease, lipid disorders, or glucose metabolism disorders.

OCs have also been found useful in the treatment of several gynecological and dermatological disorders. It has been known for years that the interference of OCs in hormonal metabolism benefits acne treatment, and today they are an accepted treatment for mild-to-moderate acne as well as hirsutism in healthy women.

It is well known that androgens in the pilosebaceous unit promote skin problems such as acne, seborrhea, hirsutism, and androgenetic alopecia (AGA) ( ). Androgen receptors are localized in the basal layer of the sebaceous gland and in keratinocytes of the outer sheath of the hair follicle. Androgens that interact with these receptors are mainly testosterone and dihydrotestosterone; the latter is 5-10 times more potent than the former.

Hormones in Oral Contraceptives and Their Impact on the Skin 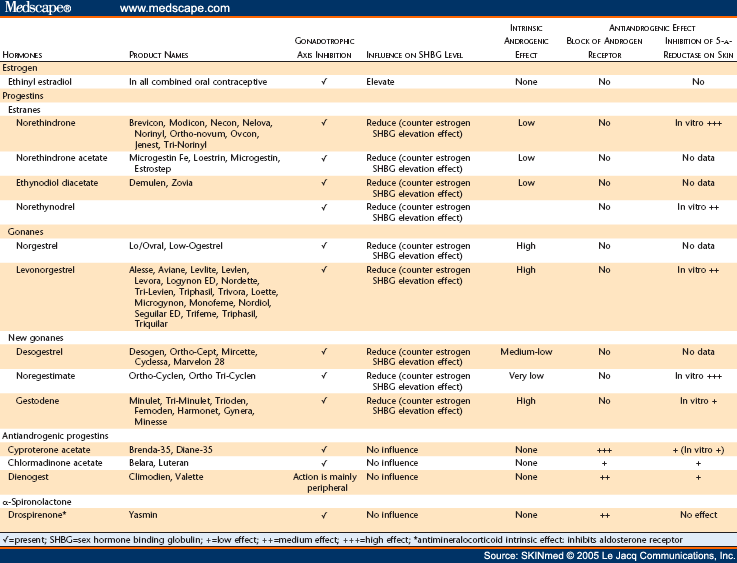 Androgens stimulate the proliferation and differentiation of sebaceous glands and sebum secretion, and promote follicular hyperkeratinization in acne. In severe acne, elevated serum androgens can be measured. In hyper-androgenic states, such as polycystic ovary syndrome, there is a high incidence of severe acne. In contrast, the majority of women with mild-to-moderate acne have normal androgen levels. Two explanations for the presence of acne without androgen serum excess were proposed: 1) a local excess in androgen production or altered local metabolism; and 2) a state of hypersensitivity to circulating androgens due to an increased number of receptors or an abnormal post-binding response.[2]

Hirsutism is known to be present in well defined androgenetic areas, and like acne, appears in hyperandrogenic states, requiring further investigation; however, 5%-10% of hirsute women have normal serum androgen levels. This idiopathic hirsutism is caused by increased sensitivity of the pilosebaceous unit to normal circulating androgen levels.[3]

The role of androgens in the pathophysiology of AGA has become clear in recent years with the discovery of type 2 5-α-reductase in papilla cells of the hair follicles. This enzyme transforms testosterone into dihydrotestosterone, particularly in areas of the scalp affected by AGA. If there are signs of hyperandrogenism, an endocrinologic evaluation is indicated. In cases of acne or hirsutism that are not due to androgen excess, OC therapy should be considered.

Estrogen and progesterone combined in OCs act in a synergistic manner in the gonadotropin axis. They decrease the secretion of hypophysial-luteinizing hormone and follicle-stimulating hormone by negative feedback, thereby inhibiting ovulation. Gonadotropin inhibition also has the effect of reducing the androgen production of ovarian theca cells and adrenal gland. An additional antiandrogenic effect of estrogens comes from their stimulation of liver production of sex hormone binding globulin (SHBG), a globulin that binds free-circulating androgens and reduces free available testosterone to peripheral tissues. High doses of estrogens may decrease sebum production, but apparently greater doses than those in OC are required for such an effect.[2]

The role of progestins in androgen metabolism is complex. Synthetic progestins derived from testosterone (19-nortestosterone derivatives) or progesterone (19-norprogesterone or 17-OH-progesterone derivatives) not only bind to the progesterone receptor, they also have the ability to bind other steroid receptors. These include androgen receptors having androgenic or antiandrogenic effects, estrogen receptor, and glucocorticoid receptor and mineralocorticoid receptor, which interfere with water metabolism. Most OCs contain testosterone-derived progestins, with the exception of drospirenone, which is a new progestin derived from 17-α-spirolac-tone with pharmacology resembling that of endogenous progesterone.[2,4,5] These progestin compounds were proposed to aggravate acne, hirsutism, or AGA by increased intrinsic androgenic effect.

When studied separately from estrogen, the different progestin compounds have variable androgenic effect by their linkage with the androgenic receptor. On the other hand, progestins counter the beneficial estrogen effect on SHBG by reducing this binding protein in serum, thus being "antiestrogenic" and androgenic. Although some progestins have more androgenic effect than others, when combined with estrogens they synergistically depress the gonadotropin secretion, decreasing androgen secretion. The counteraction of estrogens and progesterone in SHBG results in the enhancement of this binding protein, with a net reduction in free available androgen. Thus, regardless of the type of progestin involved in combined formulations, all OCs are antiandrogenic.[2]

Even norethindrone, a first generation progestin known to have a marked intrinsic androgenic effect, has the net effect of enhancing SHBG when given in proper doses and in combination with low-dose ethinyl estradiol, resulting in reduction of free testosterone. Further studies are needed to assess the androgenic skin end point effects.[6]

The classification of OC progestins in the literature is confusing. Generations are not standardized, and one compound may appear in different groups. Most of the available OCs contain derivatives of 19-nortestosterone, which may be classified into two families: estrane and gonane. The estrane group (first generation OC) is composed of norethindrone and other progestins that metabolize to norethindrone (including norethynodrel, the progestin component of the first pill). The gonane group is subdivided into two groups: Norgestrel, or its biologically active derivate, levonorgestrel, known as second generation OC, derivate from norethindrone, and have varying degrees of androgenic, estrogenic, and antiestrogenic activities; and the "new" gonanes (or third generation) -- desogestrel, gestodene, and norgestimate -- which are reported to have the least androgenic intrinsic activity of the progestin compounds.[1]

New progestins have been synthesized in the past decade with no intrinsic androgenic effects but potent antiandrogenic activity, including cyproterone acetate, chlormadinone acetate, and dienogest. Their antiandrogenic activity is induced by blocking the androgen receptors in the skin target and by reducing the activity of 5 α-reductase in sebaceous gland and hair follicles. Cyproterone acetate and chlormadinone acetate also have potent antigonadotrophin activity, which, as noted above, reduces ovarian and adrenal androgen production.[7] Dienogest slightly affects the gonadotrophic secretion; its inhibition of ovulation is mainly due to its activity in the peripheral tissues, reducing serum progesterone to anovulatory levels.[8] Combination OCs containing this group of antiandrogenic progestins have been shown to improve seborrhea, acne, hirsutism, and androgen-related alopecia.

Another progestin is drospirenone, derived from 17-α-spirolactone and pharmacologically resembling endogenous progesterone. It has both antiandrogenic and antimineralocorticoid activities. It is antiandrogenic by inhibiting ovarian androgen production like other progestins, and it also blocks androgen receptors in the skin.

Drospirenone counters estrogen effect by blocking the aldosterone receptor, thus being antimineralocorticoid. This unique progestin attenuates the aforementioned bothersome estrogenic effects that some women report with the use of OC. It is also reported to improve androgen-related skin disorders, including acne, hirsutism, and seborrhea.[5]

The effect of antibiotics on oral contraceptives is only theoretical: the action of broad-spec-trum antibiotics, which reduce the gut flora bacteria, may result in decreased absorption of estrogen. The few studies in the literature about pregnancies associated with the use of antibiotics together with OCs reported a nonsignificant higher rate of pregnancies/100 woman-years.[9]

The Optimal OC With Regard to Dermatologic Considerations

Studies demonstrate that a combination of antiandrogenic progestins (cyproterone acetate, chlormadinone acetate, and dienogest) [10,11] or drospirenone[12,13] with ethinyl estradiol is more beneficial than other combination OCs for women with a preexisting androgen related disorder, including moderate-to-severe acne, seborrhea, mild-to-moderate idiopathic hirsutism (drospirenone has less effect on hirsutism than the antiandrogenic progestins), and androgenetic alopecia. Women who complain about water retention secondary to the use of combined OCs should switch to a drospirenone-containing OC, proven to counter this effect. Drospirenone is also beneficial for skin androgen-related conditions; however, patients with renal failure, hepatic insufficiency, and adrenal insufficiency should avoid drospirenone-containing OCs because the progestin's antimineralocorticoid effect may lead to hyperkalemia.

Indeed, the choice of the optimal OC must take into account the patient's dermatological complaints (acne, hirsutism), health history (obesity, deep vein thrombosis, cardiovascular history, ovarian and breast cancer, migraine), age, and habits (smoking). As with any other drug, there are contraindications to oral contraceptives: smokers over the age of 35, history of thromboembolism, cerebrovascular disease, coronary disease, uncontrolled hypertension, hepatic failure, abnormal vaginal bleeding of unknown cause, focal migraine, and suspected or known breast cancer.

Adverse effects of combined OCs on healthy women are minimal and nonspecific (nausea, vomiting, headache, breast tenderness, depression, nervousness), and their incidence declines over time, but it should be remembered that patients with a medical history of thromboembolic event and/or risk factors for coronary disease are prone to develop more life-threatening adverse effects of OCs.

Cite this: Oral Contraceptives: Their Mode of Action and Dermatologic Applications - Medscape - Mar 01, 2005.