Several lamps that generate visible light, many of them using light-emitting diodes (LEDs), have recently found their way to the dermatologic armamentarium. Claims of their value in the treatment of a variety of conditions ranging from cosmetic (antiwrinkle) to acne, rosacea, and skin cancer are made to market them. The literature promoting these claims is limited and often questionable, however, dermatologists who own these units often report demand for their use, high customer satisfaction, and a sense that they deliver on their promises, despite a lack of clinical evidence from properly controlled studies. This article reviews promotional as well as relevant scientific literature (indexed on Medline) regarding LED-based devices and other units that deliver visible light at sub-intense fluences. Both types of literature were evaluated for their scientific validity of content. Photodynamic therapy used with exogenous photosensitizers such as aminolevulinic acid is beyond the scope of this review.

Blue light (407-420 nm) and red light (633- 660 nm) are promoted for the treatment of acne. They work by exciting high amounts of intracellular porphyrins naturally generated by Propionibacterium acnes (P. acnes). These endogenous porphyrins (mainly coproporphyrin III[1]) photosensitize the bacterium and, upon illumination, result in the formation of singlet oxygen, which combines with cell membranes to destroy the P. acnes. This process is dependent on the rate of production of excited porphyrin molecules, which is influenced by the concentration of porphyrins, the concentration of photons, the temperature, and the wavelength of the photons.[2]

Blue light and blue-red combinations have demonstrated efficacy in mild to moderate inflammatory acne, having a physical modality comparable to treatment with topical clindamycin but inferior to benzoyl peroxide plus clindamycin.[3] The viability of 24-hour in vitro P. acnes cultures was reduced by four and five orders of magnitude after two and three illuminations, respectively, with intense blue light (407-420 nm).[4] In a randomized controlled trial evaluating the use of blue light (peak at 415 nm) and mixed blue and red light (peaks at 415 and 660 nm, respectively) in the treatment of mild to moderate acne vulgaris, a mean improvement of 76% in inflammatory lesions was achieved by the combination blue-red light phototherapy after 12 weeks of daily treatment. This result was statistically superior to that achieved by blue light at Weeks 4 and 8 ( p =0.02); benzoyl peroxide at Weeks 8 ( p =0.02) and 12 ( p =0.006); and white light at all assessments ( p <0.001)[5] (See for sources of blue and red light). 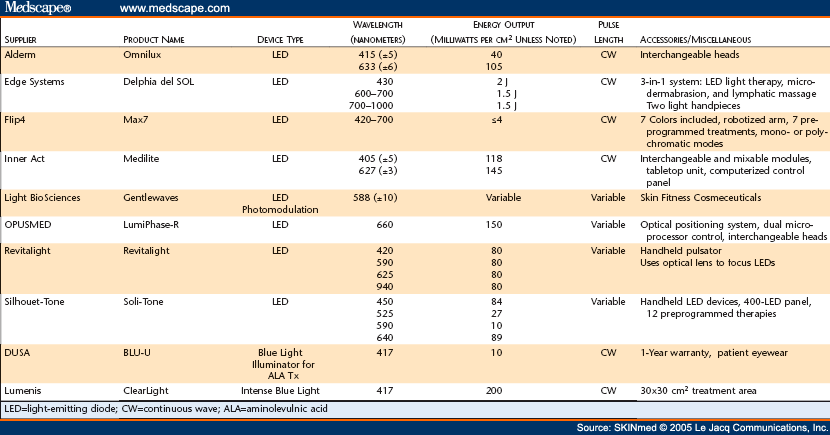 The wound-healing process has been used in the rejuvenative model. This process consists of overlapping phases of inflammation, proliferation, and remodeling. During inflammation, neutrophils, leukocytes, monocytes, and/or macrophages migrate to the site of the wound; monocytes differentiate into phagocytic cells to phagocytose debris and secrete growth factors. Complement system proteins are activated, stimulating mast cell degranulation and attracting more neutrophils. Macrophages release platelet-derived growth factor, which stimulates the chemotaxis and proliferation of fibroblasts. Leukocytes and macrophages also secrete fibroblast growth factor, which promotes the recruitment and growth of more fibroblasts, establishing the proliferative phase of the wound-healing process.[6,7] Leukocyte numbers decrease, and macrophages begin to diminish slowly as fibroblast levels peak days later. The remodeling phase begins with a fall in the number of fibroblasts; active fibroblasts either differentiate into myofibroblasts or dedifferentiate into dormant fibrocytes. The fibroblast plays a key role in the dermis during the second and third phases: it not only synthesizes collagen and elastin but also regulates the homeostasis of the ground substance in addition to maintaining the collagen fibers. Myofibroblasts position themselves along collagen fibers and exert a longitudinal force that tightens and aligns the latter. Remodeling may take 3-6 months or longer. The end result is the deposition of new collagen fibers in a better organized cellular matrix accompanied by elastogenesis and angiogenesis. A layer of new, tightly-organized collagen runs below and is attached to the basement membrane of the dermoepidermal junction.

Red light, in the absence of a wound, may be beneficial as an antiaging therapy. Mast cells are always present in the dermis; 633 nm red light may have the same effect on them regardless of their involvement in the inflammatory process. The surrounding tissue recognizes this degranulation as inflammation, and so the wound healing process is jump-started. Visible yellow light (588 nm) may also be beneficial as antiaging therapy through mechanisms similar to the action of red light (see Gentlewaves, Light BioScience, LLC, Virgina Beach, VA; please see for sources of red light).

The Omnilux system (Alderm, NA, LLC, Irvine, CA) uses a panel of 2000 focused diodes in interchangeable heads to deliver 408 nm blue or 633 nm red light. These two can be used alone or in sequence. The red module may be beneficial in aging via the preferential degranulation of mast cells; release of glucosamines, heparin (a glycosaminoglycan) and histamine, which induce vasodilatation; the "strengthening" of capillaries; increased tissue oxygenation; promoting epithelial remodeling; and stimulation of fibroblasts to produce collagen and elastin. Glycosaminoglycans replace water between collagen and elastic fibers, firming the skin. The use of the blue and red modules concurrently is claimed to be beneficial in acne as the red light module targets deeper-seated lesions. Treatment usually consists of two sessions per week for 4 weeks. A typical session takes ≈20 minutes.

TheMax7(Flip4Inc.,Sainte-Julie,Quebec,Canada) unites LED technology with an automated robotized arm. It can deliver seven wavelengths of visible light, ranging from 420 nm to 700 nm. The manufacturers claim that each chosen wavelength has a customized modulation program that ensures maximum skin rejuvenation. It has seven programmed polychromatic treatments and seven programmed monochromatic treatments designed for various skin types and various skin treatments, respectively. Manufacturers recommend a minimum of six treatments for most common skin conditions.

The Medilite (Inner Act LLC, Reno, NV) system delivers 405 nm blue light for the treatment of acne and 627 nm red light for skin rejuvenation in a tabletop unit. The light modules are removable and interchangeable with mixable blue and red wavelengths. The red light module is used to increase new tissue growth, speed healing, stimulate collagen, and reduce lines and wrinkles. It incorporates a computerized controlpanel for ease of use.

Gentlewaves is marketed as a photomodulation device that uses low-intensity LEDs in a proprietary pulsed "code" as antiaging therapy. It delivers pulsed visible yellow light (588 nm ± 10 nm) from two contiguous LED panels. It is claimed to "energize" mitochondria, send cell signals to cell receptors, increase/decrease gene activity in DNA, and thus reverse the appearance of aging and photoaged skin. It incorporates a skin care kit designed to enhance and maintain the results of the treatment, which includes a cleanser, a daily facial lotion, a nightly facial lotion, and sunscreen. The effectiveness of this device is documented by histology exhibiting new collagen formulation, high resolution ultrasound, and PRIMOS digital surface profilometry.[13]

The Revitalight system (Skincare Technology Inc., Chicago, IL) claims to be a safe and effective way to help diminish the visible appearance of fine lines, wrinkles, and age spots on the face, neck, and hands by promoting collagen firmness by using LED photo pulsation technology. It delivers four specific wavelengths of light (420 nm, 590 nm [yellow], 625 nm, and 940 nm [infrared]) via handheld "pulsators." It uses an optical lens to focus the LEDs.

The Soli-Tone system (Silhouet-Tone, St. Albans, VT) is a two-in-one system that includes LumiLift and LumiFacial. LumiLift involves delivering 640 nm red LED light from handheld pieces placed on the skin. These pieces also deliver a "micronized current" and a "high-frequency polarized current" via electrodes placed in the handpieces. LumiFacial is comprised of a 400-LED panel situated above the skin. This panel can deliver four wavelengths of light: 470 nm, 525 nm (green), 590 nm, and 640 nm. It has a computerized control panel with preprogrammed treatments.

The level of evidence for the use of sub-intense fluences of visible light in dermatology is weak. As few randomized controlled trials have assessed the safety and efficacy of these devices, the dermatologist is left to infer the worthiness of incorporating LED-based technology from in vitro observations, anecdotal evidence, and commentaries appearing in trade (mostly non-peer-reviewed) publications.

The uncontrolled proliferation of services based on these devices at cosmetic/aesthetic locales where the personnel have little if any knowledge of dermatology and photobiology may be dangerous. Regulations that apply in many states to the use of lasers and intense pulsated light sources should be expanded to include these devices as the benefits (and risks) of their use in acne, rosacea, wound healing, aging, etc. (mostly medical diagnoses) relate to altering the structure and function of the skin, which constitutes the practice of medicine.