Addison's Disease: Diagnosis Can Be More Difficult Than Treatment

Addison's disease, or primary adrenal insufficiency, is most commonly caused by an autoimmune destruction of cells in the adrenal cortex. Unfortunately, the clinical presentation of the disease is often nonspecific and the 'text book' patterns of electrolyte disturbance infrequently observed. On the other hand, when the disease is suspected, an aetiological diagnosis can quickly be made using commercially available autoantibodies. Moreover, with current treatment, typically involving both glucocorticoids and mineralocorticoids, patients with Addison's disease can be expected to have a normal lifespan.

Cause is Usually Autoimmune

The estimated prevalence of Addison's disease in industrialised countries is 117 per million,[1] which translates into approximately 35 000 cases in the US. Between 80 and 90% of cases of Addison's disease are caused by an autoreactive process of activated immune cells directed against adrenocortical 21-hydroxylase (an enzyme involved in the synthesis of glucocorticoids and aldosterone). The other 10 to 20% of cases are caused by tuberculosis, HIV, sarcoidosis, amyloidosis, bilateral metastases, adrenoleukodystrophy, adrenal haemorrhage and congenital hypoplasia.[2]

Immunoreactivity against 21-hydroxylase results in low levels of hydrocortisone and aldosterone.

The symptoms of Addison's disease are often vague. The most frequent complaints are chronic weakness and fatigue, nausea and vomiting, and (less frequently) acute abdomen. Salt craving or excessive intake of licorice, to substitute for the deficiency in aldosterone production, is often present (it should be noted that licorice candy often does not contain actual licorice but only flavour; however, licorice root is widely available).[2]

The usual signs at presentation of Addison's disease include bodyweight loss due to anorexia, hyper-pigmentation of the skin, systolic blood pressure <110mm Hg, dizziness and symptoms of orthostatic hypotension (assessing the patient for postural hypotension is a very sensitive test for adrenal insufficiency).

It is important to note that Addison's disease is also often associated with other autoimmune disorders such as autoimmune thyroid disease, premature ovarian failure, type I diabetes mellitus, vitiligo, alopecia and coeliac disease (a cluster known as autoimmune polyendocrine syndrome type II).[2]

...but Lab Tests Can Clinch Diagnosis

The presence of adrenocortical failure can be determined by a stimulation test in which production of hydrocortisone is measured after administration of corticotropin (a pituitary hormone which stimulates production of glucocorticoids and androgens in the adrenal cortex).[2]

The presence of mineralocorticoid deficiency can be determined by measuring the urinary aldosterone level, which is low in Addison's disease. However, it is clinically more useful to assess renin activity. Renin activity is elevated in Addison's disease because a lack of aldosterone causes renal sodium losses and hyponatraemia, and therefore hypovolaemia, which in turn stimulates renin production.[2]

While non-autoimmune causes of Addison's disease should always be considered, they are more likely if 21-hydroxylase antibodies are absent. CT scans of the adrenal glands are often useful when a non-autoimmune aetiology is suspected. The diagnosis of adrenoleukodystrophy can be made by DNA-based testing.[2]

A suggested approach to the management of patients with Addison's disease is presented in the Patient care guidelines. In patients suspected to be experiencing an adrenocortical crisis, treatment should be initiated immediately after blood has been drawn for measuring serum sodium, potassium and calcium, blood glucose, and plasma hydrocortisone and corticotropin levels. Initial therapy includes hydrocortisone 100mg administered intravenously, followed by a rapid infusion of 2 to 4L of 0.9% saline solution during the first 12 hours. Intravenous injections of hydrocortisone 50 to 100mg should be repeated every 6 hours during the first 24 hours. Improvement may take place within 30 to 60 minutes or over several days. When improvement does not occur, the diagnosis should be re-evaluated and any possible precipitating cause (e.g. bacterial infection) excluded.[2] 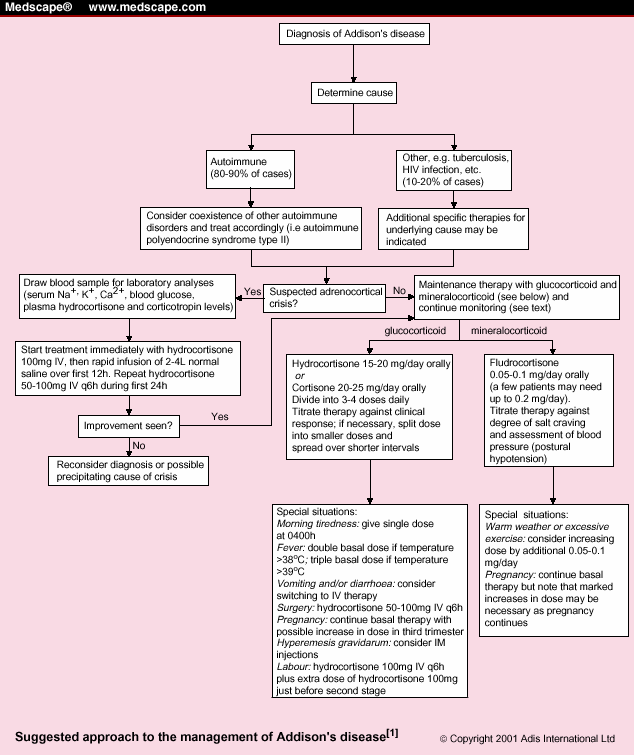 Maintenance Therapy Should Be Flexible...

Replacement of both glucocorticoids and mineralocorticoids is required in patients who need maintenance therapy. Whenever possible, the oral route of administration is preferred.

Cortisone 20 to 25 mg/day or, preferably, hydrocortisone 15 to 20 mg/day is recommended for glucocorticoid replacement. Therapy should be divided into 3 or 4 doses daily to mimic the natural variation of plasma hydrocortisone levels and to increase the general well being of the patient. If necessary, a more satisfactory response may be obtained by splitting the total daily dose of hydrocortisone into smaller doses and spreading them over shorter intervals.

Even then, some patients will have low morning plasma levels of substituted cortisone and therefore feel tired in the morning. This can often be avoided by taking a single dose of hydrocortisone at 0400 hours, thus mimicking the natural diurnal levels of this hormone.[2]

Hydrocortisone therapy should always be titrated against clinical response (rather than against plasma corticotropin levels, which need not be measured). As a precaution, however, patients with Addison's disease should also be instructed to temporarily increase the dose of hydrocortisone if fever, infection or trauma develop. A general rule of thumb is to double the basal dose of hydrocortisone when the temperature is elevated above 38°C, and triple the basal dose when the temperature exceeds 39°C. No gradual tapering of the dose is necessary after the fever has subsided. If there is vomiting and/or diarrhoea associated with an illness, intravenous hydrocortisone may be required because oral absorption may be affected. Patients undergoing surgery should be given hydrocortisone 50 to 100mg intravenously every 6 hours.

Pregnant women with Addison's disease should continue their basal supplementation therapy but may need increased doses of glucocorticoid in the third trimester. Women with hyperemesis gravidarum may not absorb adequate amounts of oral hydrocortisone and may therefore require intramuscular injections. During labour, intravenous injections of hydrocortisone 100mg should be given 6-hourly with continuous intravenous normal saline solutions and an extra dose of hydrocortisone 100mg administered just before the second stage of labour.[2]

Mineralocorticoid replacement therapy, in the form of fludrocortisone, is given in a daily dose of 0.05 to 0.1mg. A few patients may need as much as 0.2mg of fludrocortisone daily. Therapy should be titrated against the degree of salt craving and the magnitude of postural changes in blood pressure; titration of the fludrocortisone dose within the normal plasma renin range often results in clinical signs of oversubstitution.[4] During warm weather or excessive exercise, the fludrocortisone dose may need to be temporarily increased by an additional 0.05 to 0.1 mg/day. Marked increases in mineralocorticoid doses may also be necessary in pregnant women. All patients should be advised to modulate salt intake to their liking.[2]

In patients on maintenance therapy, the aim is to establish and administer the lowest possible replacement dosage. Low blood pressure, symptoms of dizziness and excessive salt cravings or increased licorice intake indicate inadequate replacement therapy. Conversely, oversubstitution with an excess of glucocorticoids will cause weight gain and, sometimes, the clinical features of Cushing's disease. Bodyweight in particular should therefore be carefully monitored. Moreover, because excessive doses of glucocorticoid increase the long term risk of developing osteoporosis, regular bone mineral density measurements are required.[2]

As noted above, Addison's disease is frequently associated with other autoimmune disorders. Thus, it is wise to routinely screen for the development of thyroid disease, pernicious anaemia, type 1 diabetes mellitus and coeliac disease. When hypothyroidism is diagnosed simultaneously with Addison's disease, corticosteroid replacement therapy should precede thyroid hormone replacement in order to avoid precipitating an adrenocortical crisis.[2]

Approximately 15 to 20% of female patients with Addison's disease will develop hypogonadism, a condition which can be identified years before complete ovarian failure by determining autoantibodies against side-chain cleavage enzyme and 17 -hydroxylase.[2]

Two issues in the treatment of Addison's disease that require future study are:[2]

Cite this: Addison's Disease: Diagnosis Can Be More Difficult Than Treatment - Medscape - Apr 23, 2001.